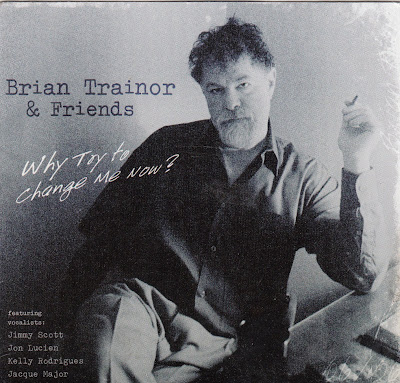 Brian Trainor was our Van Cliburn. A world class pianist from South Jersey, he could play Tchaikovsky and dabbed in rock and roll, but preferred jazz and reveled in it. Brian Trainor nailed the keys like nobody else, took the music to another level, then went on the road to Europe and Asia, where his genius was recognized and he was better appreciated than at home

It wasn’t until the early 1990s, at the second Cape May Jazz Festival, when we realized what an incredible wonder we had right in our midst. The first time he played Cape May was as a sideman, I think it was for singer Oscar Brown at the Rusty Nail. But Brian stood out, boy did he stand out. By the time he got to T. Monk’s "'Round Midnight," everybody was following him to the end, and he was invited back to many other festivals.

Regardless of the song or who he was playing with, each Brian Trainor session started out the same, with him meticulously dressed, sometimes in a tuxedo, sipping a drink, quietly composed as he sat down at the piano. Beginning soft, and with an increasing fury, he would drag the whole room into the piano like it was a black hole you couldn’t escape. Before he was finished the jacket was off, the tie tossed and shirt unbuttoned. In the end there was a sudden silence and a sweat soaked, hair tossed Brian, with a ferocious grin on his face and roaring, appreciative crowd.

When Brian Trainor played the fledgling Somers Point Jazz Fest in 2004, the electric piano provided him didn’t work, so he pulled over an old standup piano from against the wall at Mac’s that was only used for weddings and hadn’t been tuned in years. He took parts off it, turned it around and sat down and wowed the crowd for two incredible sets, as everyone there will attest.

In Somers Point Brian met Jacque Major, who talked him into stopping by her Sunday afternoon rock & roll gig at the Bubba Mac Shack, where he sat in with the motley band of rockers and added his world class keys to the raucous, outrageous proceedings. From the Academy to the saloon, it didn’t matter, Brian fit in and the band had to keep up with him.

In the All Music Guide, Alex Henderson describes him as, "A melodic pianist/composer who was born and raised in Trenton, NJ, Brian Trainor has loved both jazz and classical since childhood. Trainor's interest in music was greatly encouraged by his father, Francis Trainor, Sr., a singer who had a ‘day gig’ as a meat cuttter and saw to it that his son was studying classical piano as early as kindergarten. Trainor (whose influences range from Bill Evans to Thelonious Monk and Bud Powell) was still a child when he studied jazz piano with Trenton pianist Alan Bosley, and he also had many conversations about jazz with his close friend and neighbor, alto saxman Richie Cole. It was Cole who introduced Trainor to another alto great, Phil Woods, with whom the pianist began studying at the age of 13.

Trainor was still a teen-ager when he met his hero Evans, who wasn't teaching formally but took the time to give him advice and feedback. In the late 1960s, Trainor played some live dates with Booker Ervin and Jack DeJohnette. Though Trainor didn't become a huge name in jazz in the 1970s or 1980s, he played quite a few American gigs and spent many months touring Europe.”

As he came to Cape May, Brian first went to Europe to play the French Riveria as a sideman with Philly tenor sax grand daddy Bootsie Barnes, another Cape May Jazz Fest regular. In the 1990s,Trainor led his own piano trio with bassist Vince Fay and drummer Bill Jones, and performed or recorded with some of the best jazz artists in the world.

Brian had also previously done “Take A Train” (1997), a unique collaborative recording with King Crimson drummer Ian Wallace, who recorded with Bob Dylan and did the drum back recording for The Traveling Wilburies (Dylan, Tom Petty, George Harrison, Roy Orbison).

On his internet Blog, Ian Wallace wrote about a Crimson reunion jam session he did inCalifornia in July (7th). "Whilst this was going down, my friend, pianist Brian Trainor was, unbeknownst to me, also in Simi Valley, up from Oceanside attending a dog show with his Mrs. Kelley. Brian is the Trainor from our CD "Take a Train" which sold about three copies in the late eighties. After the show, he and Kelley were driving back home when Brian complained of feeling dizzy. Kelley leaned over to him, put her fingers on his neck and jokingly said, ‘you must be bad, I don’t feel any pulse.’ At which point Brian jerked once and died. An aneurism. He was fifty-five. A great jolly bear of a man with a wonderfully infectious laugh. He called me "E" and I’m going to miss him."

Although I couldn’t find any local obituaries on line, a Spanish jazz magazine did a write up, though its in Spanish, but Brian’s sister responded in English saying, “On behalf of my father, my older brother, Francis and myself, I’d like to thank you for the beautiful write up concerning the life and works of my brother, Brian Trainor. He was an amazing musician which is something I believe one is born with. He was fortunate enough to be born to a household where music was the key ingredient. My late mother, Eleanora was a pianist and loved music, and my father was a singer who encouraged all creativity in his three kids and still does. Mom and Dad together gave Brian the understanding and patience he needed when other parents might have pulled him back. Brian went after music and pursued it with a love like no other. Whenever he could to go a concert or talk to a musician he would. He was even brought home as a teenager by a member of Ray Charles’ band on a number of occasions. It was his life. While others are mourning the loss of him music and creativity, his family is grieving on the loss of him. We ware very sad and shocked still.

His music is living one and his new CD is coming out soon. Thank you again for the great write up on Brian. Just when it is all about Brian, he is not here to gloat. Oh, how we miss him. He was a dear brother and friend. Sadly missed by his sister, Maureen and his family, father brother, brother-in-law, daughter, son and grandkids.”
The new CD, Brian Trainor & Friends’ "Why Try To Change Me Now" was just posthumously released (September 12 on Summit Records), and includes vocals by Cape May Jazz regular Lois Smith and Somers Point's own Jacque Major. When I saw Jacque and Brian collaborate so well, despite playing in different leagues, I thought Brian would play piano on Jacque’s next album, but instead Jacque sings on his.

The record liner notes mention, "The recording documents Trainer's finest and final playing (as well as Marcus). Trainer's excitement for this project was unlike anything he had done previously. Remembering Ray Charles, Shirley Horn and Nina Simone, Trainor was struck by the importance of the lyric in jazz and set out to document this with some of his favorite singers. Herein he has gone all the way back to the original sources and returned with some terrific stories, moving solos and marvelous vocals."

Besides locals Jacque Major and Lois Smith, other vocalists on the recording include Caribbean romance singer Jon Lucien, the legendary Little Jimmy Scott and Kelly Thompson Rodriguez from North Jersey. The man with a girl's voice, Little Jimmy Scott's "Everybody's Somebody's Fool" was a hit in 1950, the year Brian was born, and a testament to the variety of vocalists he has on this recording.

Steve Marcus, who plays tenor and soprano sax on this album, also died at the age of 66 last October, shortly after the recording was made. Marcus had helped merge jazz rock fusion with Larry Coryell and Gary Burton before doing straight out jazz with Buddy Rich. The recording was going to be dedicated to him.

Among the songs on "Why Try To Change Me Now?" there’s a lot of lovin’ going on with, "She Goes Home," "When She Loved Him," "I Got It Bad," "Feelin’ Good," "Everytime We Say Goodbye," an instrumental "Song for Island Girl," the crooner classic "I Got the World on a String," and the spiritual "Take My Hand Precious Lord," which I have a feeling Lois Smith sings as gospel.

Brian played and Lois Smith sang many songs together at various Cape May Jazz Festivals over the years, and with their new recording, this festival would have been a real special occasion. But it wasn’t meant to be as planned. Instead, the Cape May All Star Band, which Trainor himself organized, will play a special tribute to him during a memorial service at this fall’s festival at noon on Saturday, November 11th, at Cape May Convention Hall.

The festival program describes Trainor as “a man beyond description and world renowned musician who has deeply touched all involved and in attendance at previous jazz festivals. The Cape May All Star Band will perform in tribute to our sadly missed friend and mentor.”

This festival’s theme is "New Orleans Comes to Cape May," and it will be fitting to give Brian a traditional New Orleans style wake, with Lois Smith leading "When the Saints Come Marching In," just as they conclude every festival. Why try to change it now?
Posted by William Kelly at 10:50 AM

thank you bill for doing the wonderful write up on my father...brian trainor. although it has taken me 3 years to read, he is sadly missed by many. it was a pleasure remembering and reading your article today.
thank you again
stefanie trainor
daughter