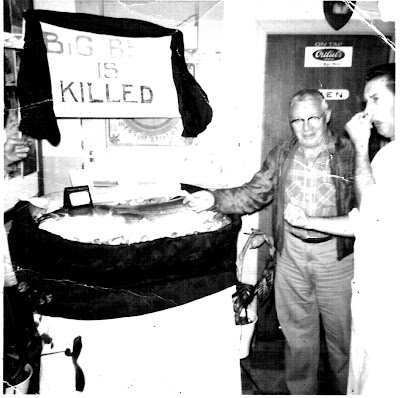 Big Ben was the whopper striper that was caught off LBI in Elmer Gregory's boat in the Sixties, a world record a the time, and only eclipsed by McReynold's big fish, caught off the Atlantic City inlet jetty in the Seventies, and still the world records.

After the funeral, Big Ben was stuffed and mounted above Gregory's Dining Room door, where it stayed until they remodeled the place in the late 70s.

In late summer of 2005 my friend Dick Russell published a book Striper Wars, a really terrific book about striper fishermen, and while he was doing a book tour, he stopped in Somes Point where I arranged for him to give a slide show and sign copies of his books - provided by the girls at Sun Rose Books & Music in Ocean City.

I also called Corkey and got Gregory Gregory to locate Big Ben and both fish were brought to Gregs for Dick's talk and slide show - a Meeting of the Mounts - two world record stripers together.

And they were remarkably different, with McReynold's fish being shorter and fatter, while Big Ben was longer and skinnier. (I'll get their weights).

Mike Shepard, the sports editor for the Press of Atlantic City, and a real class guy, came by, and a writer and photographer for the Press covered the story.

And I wrote about it, but I'll have to dig out both the Press and my stories and will post them with a photo of the fish together.
Posted by William Kelly at 5:21 PM