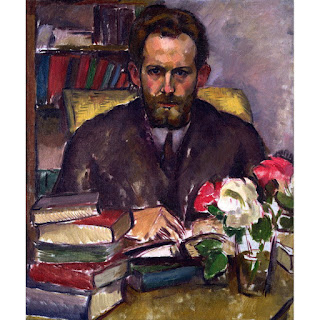 Willard Huntington Wright in a portrait painted by his brother

Art critic and detective fiction writer Willard Wright is said to have built the Wyngate mansion in Somers Point that took up an entire city block between fourth and fifth street and New York Avenue. There were many fabulous parties held there that included some of Wright's friends and fellow writers and artists, but after a fire, some of the main house burned down. The remainder was restored and still sits recognizable on the fifth street corner, and the interesting carriage house on the back alley give a good indication of the style of the place.

Wright was an important figure in avant-garde cultural circles in pre-World War I New York, and under the pseudonym (which he originally used to conceal his identity) he created the immensely popular fictional detective Philo Vance, a sleuth and aesthete who first appeared in books in the 1920s, then in movies and on the radio.

Willard Huntington Wright was born to Archibald Davenport Wright and Annie Van Vranken Wright on October 15, 1888, in Charlottesville, Virginia. His younger brother, Stanton Macdonald-Wright, became a respected painter, one of the first American abstract artists, and co-founder (with Morgan Russell) of the school of modern art known as "Synchromism". Willard and Stanton were raised in Santa Monica, California, where their father owned a hotel. Willard, a largely self-taught writer, attended St. Vincent College, Pomona College, and Harvard University without graduating. In 1907, he married Katharine Belle Boynton of Seattle, Washington; they had one child, Beverley. After divorcing Katharine, whom he had abandoned early in their marriage, he married for a second time in October 1930. His second wife was Eleanor Rulapaugh, known professionally as Claire De Lisle, a portrait painter and socialite.[2]

At age 21, Wright began his professional writing career as literary editor of the Los Angeles Times, where he was known for his scathing book reviews and irreverent opinions. He was particularly caustic about romance and detective fiction. His friend and mentor H.L. Mencken was an early inspiration. Other important literary influences included Oscar Wilde and Ambrose Bierce. Wright was an advocate of the naturalism of Theodore Dreiser, and Wright's own novel, The Man of Promise (1916), was written in a similar style. He also published realist fiction as editor of the New York literary magazine The Smart Set, from 1912 to 1914, a job he attained with Mencken's help. He was fired from that position when the magazine's conservative owner felt that Wright was intentionally provoking their middle-class readership with his interest in unconventional and often sexually explicit fiction. In his two-year tenure, Wright published short stories by Gabriele D'Annunzio, Floyd Dell, Ford Madox Ford, D.H. Lawrence, and George Moore; a play by Joseph Conrad; and poems by Ezra Pound and William Butler Yeats.

Wright's energies were devoted to numerous projects, reflecting his wide range of interests. His book What Nietzsche Taught appeared in 1915. An attempt to popularize the German philosopher with skeptical American audiences, it described and commented on all of Nietzsche’s books and provided quotations from each work. Wright continued to write short stories in this period; in 2012 Brooks Hefner[3] revealed heretofore unknown short stories that featured an intellectual criminal, written by Wright under a pseudonym several years before his adoption of the Van Dine pseudonym.

Wright was, however, most respected in intellectual circles for his writing about art. In Modern Painting: Its Tendency and Meaning (secretly co-authored in 1915 with his brother Stanton), he surveyed the important art movements of the last hundred years from Manet to Cubism, praised the largely unknown work of Cézanne, and predicted a coming era in which an art of color abstraction would replace realism. Admired by people like Alfred Stieglitz and Georgia O'Keeffe, Wright became under his brother's tutelage one of the most progressive (and belligerently opinionated) art critics of the time and helped to organize several shows, including the "Forum Exhibition of Modern American Painters", that brought the most advanced new painters to the attention of audiences on both coasts. He also published a work of aesthetic philosophy, The Creative Will (1916), that O'Keeffe and William Faulkner both regarded as a meaningful influence on their thinking about artistic identity.

In 1917, Wright published Misinforming a Nation,[4] in which he mounted a blistering attack on alleged inaccuracies and British biases in the Encyclopædia Britannica Eleventh Edition. A Germanophile, Wright did not support America's decision to join the Allied cause in World War I, and he was blackballed from journalism for more than two years after an overzealous secretary (erroneously) accused him of spying for Germany, an episode that became a much-publicized scandal in New York in November 1917. Though cleared, his favourable view of Prussian militarism cost him his friendships with Mencken and Dreiser. After suffering a nervous breakdown and the beginning of a long-term dependence on illegal drugs, Wright retreated to California, where he attempted to make a living as a newspaper columnist in San Francisco.

Returning to New York in 1920, Wright took any freelance work that came his way but lived a restless, impoverished existence and, in his displays of temper and anxiety, alienated many of his old friends. By 1923, he was seriously ill, the result of a breakdown from overwork, he claimed, but in reality the consequence of his secret cocaine addiction, according to John Loughery's biography Alias S.S. Van Dine.

Confined to bed for a prolonged period of recovery, he began in frustration and boredom reading hundreds of volumes of crime and detection. As a direct result of this exhaustive study, he wrote a seminal essay, published in 1926, which explored the history, traditions and conventions of detective fiction as an art form.[5] Wright also decided to try his own hand at detective fiction and approached Maxwell Perkins, the famous Scribner's editor whom he had known at Harvard, with an outline for a trilogy that would feature an affluent, snobbish amateur sleuth, a Jazz Age Manhattan setting, and lively topical references. In 1926, the first Philo Vance book, The Benson Murder Case, was published under the pseudonym "S.S. Van Dine". Within two years, following the publication of The Canary Murder Case and The Greene Murder Case,Wright was one of the best-selling authors in the United States.

Frankly embarrassed by his turn from intellectual pursuits to mass market fiction, Wright never wanted to publish under his own name. He took his pseudonym from the abbreviation of "steamship" and from Van Dine, which he claimed was an old family name. According to Loughery, however, "there are no Van Dines evident in the family tree" (p. 176). He went on to write twelve mysteries in total, though their author's identity was unmasked by 1928. The first few books about the distinctive Philo Vance (who shared with his creator a love of art and a disdain for the common touch) were so popular that Wright became wealthy for the first time in his life. His readership was diverse and worldwide. David Shavit's study[6] of World War II POW reading habits revealed that Vance was one of the favorite detectives among officer POWs.

However, according to critic Julian Symons:[7]
[Van Dine's] fate is curiously foreshadowed in that of Stanford West, the hero of his only [non-crime] novel, who sells out by abandoning the unpopular work in which he searched for "a sound foundation of culture and aristocracy" and becoming a successful novelist. The title of an article Wright penned at the height of his fame, "I Used to be a Highbrow and Look at Me Now," reflects both his pleasure in his new-found fame and his regret that he would never again be regarded as a serious writer.
Wright's later books declined in both quality and popularity. The reading public's tastes changed, and the "hard-boiled" school of detective fiction became the dominant style in the 1930s.

The new mood was captured by Ogden Nash in his brief verse:
Philo Vance
Needs a kick in the pance.

Philo Vance and Sam Spade occupy different aesthetic universes. Wright continued to make money, though, and by the end of the decade, he saw himself caught in a trap from which he could not escape: in the midst of the Depression, he could not return to literary journalism and art criticism which paid very little, now that he and his wife were accustomed to an extravagant way of life, and yet he no longer believed in the kind of novels he was producing each year in order to maintain that way of life.

In addition to his success as a writer of fiction, Wright's lengthy introduction and notes to the anthology The World's Great Detective Stories (1928) are important in the history of the critical study of detective fiction. Although dated by the passage of time, this essay is still a core around which many other such commentaries have been constructed. He also wrote an article, "Twenty Rules for Writing Detective Stories", in 1928 for The American Magazine[8] It has been frequently reprinted and compared to "Knox's (Ten) Commandments" by Ronald Knox.[9]

Wright wrote a series of short stories for Warner Brothers film studio in the early 1930s. These stories were used as the basis for a series of twelve short films, each approximately 20 minutes long, that were released in 1931 - 1932. Of these, The Skull Murder Mystery shows Wright's vigorous plot construction. It is also notable for its non-racist treatment of Chinese characters, something quite unusual in its day.'

As far as it is known, none of Van Dine's screen treatments has been published in book form, and none of the manuscripts survive. Short films were popular then, and Hollywood made hundreds of them during the studio era. Except for a handful of famous comedies, short films are not often discussed in more recent film reference books like features and animated cartoons often are.

From a monetary perspective, Wright was fortunate in his experiences with Hollywood, and he was lionized on his visits to the movie capital. All but two of his novels were made into feature-length films, and the role of Philo Vance was played in different film versions by stars as popular as William Powell (before his Nick Charles period), Basil Rathbone, and Edmund Lowe. Louise Brooks, Jean Arthur, and Rosalind Russell also appeared in the S.S. Van Dine movies.

On April 11, 1939, at age 50, Wright died in New York of a heart condition exacerbated by excessive drinking, a year after the publication of an unpopular experimental novel that incorporated one of the biggest stars in radio comedy, The Gracie Allen Murder Case.

He left behind a complete novelette-length story that was intended as a film vehicle for Sonja Henie and was published posthumously as The Winter Murder Case. Max Perkins generously referred to Wright at the time of Wright's death as a "gallant, gentle man" who had been tormented by the pressures of a market-driven age.[10] His portrait, painted by his brother in 1914, hangs in the permanent collection of the National Portrait Gallery in Washington, D.C.

Biographical information for this entry is taken from John Loughery, Alias S.S. Van Dine: The Man Who Created Philo Vance.

Shavit, David (Spring 1999). "'The Greatest Morale Factor Next to the Red Army': Books and Libraries in American and British Prisoners of War Camps in Germany during World War II"

Masschelein, Anneleen and Dirk de Geest (2017). "So You Think You Can Write...Handbooks for

Works by or about Willard Huntington Wright at Internet Archive

Works by or about S.S. Van Dine at Internet Archive

The papers of Willard Huntington Wright at the Albert and Shirley Small Special Collections Library at the University of Virginia.

Posted by William Kelly at 9:44 AM