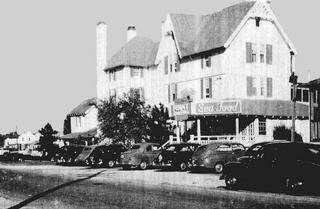 It used to be the Point Tavern, a really terrific place where all the city's big wigs would eat lunch and dinner from the 30s-60s. As it fell into disrepair, a guy from Longport - Ernie bought it and kept the marina and sold the liquor license. The license was moved to the Somers Point Shoping Center and was run as a bar/restaurant by the family who owned the Duck Farm, and then by George Sutor for many years, but is now a take out liquor store.

Ernie, a mechanic by trade, ran the marina for decades and the building fell into disrepair.

In the 1990s, John Mayer, whose family owned Mayer's Marina at the base of Delaware Avenue, bought Ernie's marina and rebuilt the entire building, first class, and made it into a bed and breakfast restaurant. It has 8 rooms upstairs.

He needed a liquor license, and tried to open a private club for members only so he could sell them booze, but he failed and went bankrupt.

Dr. Ira Trocki (Mike Tyson's cut man in the ring), a plastic surgeon who buys threatened busineses, bailed him out, but Johnny Mayer ended up slipping out in the middle of the night in a van full of his antiques, and is now living in Florida.

He also skipped out on some wedding and banquet down payments that Trocki wouldn't honor.

Trocki also bought the old Tony Marts - Egos - Brownies nigth club - right at the foot of the Ocean City causeway, and moved the liquor license down the street to the Inn, which he sold to Tucker.

From South Philly, Tucker had a beautifull wife, also from South Philly, and ran a tight kitchen with great food and good prices. It was a real comfortable place to go, and they really took care of you like it was a private club. A group of us, led by Freddie Prinz and Dick Boccelli, used to eat dinner there all the time, sitting out along the windows by the bay.

When Freddie got married he had his reception there, and when he realized that Tucker had overbilled him, he cancelled the check and gave him another one with the correct amount. But that was a clue that Tucker was on his way out too.

Then comes Fanucci, a Vineland insurance guy who apparently never ran a restaurant before, and still can't.

I'm sure Trocki kept the mortgage and took the place back and is now looking for another sucker.

But the building is beautiful, the location is excellent, and it should be a really great bed & breakfast and fine, first class restaurant, if someone who knows how to run one will take it over and cash out Trocki.
Posted by William Kelly at 8:23 PM