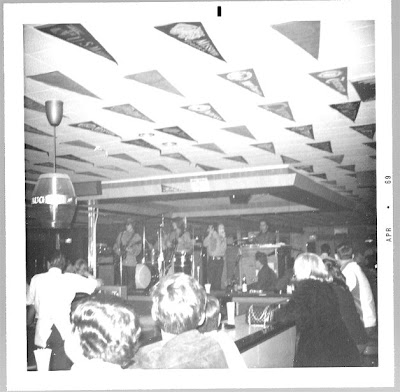 Posted by William Kelly at 7:30 PM

I had another one of those “hot dog” moments when we first loaded in that summer of 68. I was using a big double bass drum set much like what Ginger Baker from Cream was using. When this Pete questioned the feasibility of getting them all up onto the center stage all the rest of the bands equipment, he said, " Do you need all these drums?" My retort was "do you need all these bars in here?" Of course he said yes and my replay was" well I need all my drums!" I don't know if that ever got back to Tony but needless to say I never felt that Pete ever warmed up to me after that tiff!

Bill, forgive me for writing so much, but I want to share a sentimental moment that I had with Tony. After he chewed us out that first night regarding our performance and the religious moment of being called bums and being threatened to be thrown out, things started to go well for us. Tony would routinely stand over on my side of the stage and watch us. I was teaching school in Rochester and in 68’ needed to maintain my short hair. One night prior to coming to Tony's I went out and bought a blonde Afro wig as a joke and wore it to a job. The band though it was a good idea because it matched the rest of the freaky hair in the band and didn't have the appearance of a bible salesman playing with a freaky rock band, so I continued to wear the wig. (In the white uniform picture I am the second from the right). Tony never saw me without it. One morning I was down in the bar adjusting my drum set and Tony walked in. Of course I wasn't wear the wig and he thought I was a set up guy or something. He said to me in his unique combination of Old World Italian and Jersey dialect "I wanta to get da drummer up in the air so people can see him. Come with me across the street and help me get a riser for his drums." I didn't say anything because I was still scared half to death of him and went across the street and we dragged this riser into the club. I set my drums up and was finishing adjusting them when he walked back in. He told me to go get the drummer to make sure that they were playable like this. I informed him that they were fine but he insisted that I get the drummer’s approval. Finally not knowing how he was going to respond I said "Tony, I am the drummer". He looked at me and said " you're not da drummer, da drummer has all that hair!" I said "Tony that's a wig I am the drummer!" At which point I sat down and went into one of my drum things that he seemed to like when he would stand and watch us at night. Bill, you would have loved to have seen the look on his face, he called me a SOB”, laughed and walked away shaking his head.

From that moment on when he would come in, he would stand next to the stage on my side, I would lift up the side of my wig while I was playing and he would laugh, shake his finger at me and walk away. It became a kind of secret between he and I but to me my way of saluting him with affection.

I will get you more pictures if you would enjoy looking at them. Really, we appreciate your help and interest. We don't want to bother you with this but we would all love to be involved one more time in what was a very memorable time of our lives while we still can. I don't know to many bands from that era are still intact as we are.

You have been very supportive.