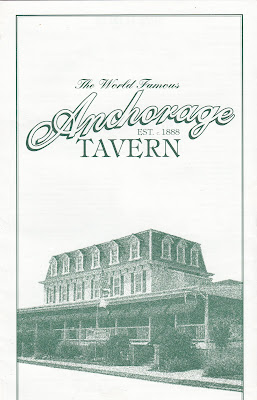 The last working hours of the Anchorage Tavern in 1985 were like many others at the Somers Point bar. A few locals were sitting around, reminiscing over their drinks and a couple of strangers were playing pool in the back. The news had come suddenly, though not unexpectedly, that the tavern’s liquor license would be suspended for over a month for having served minors.

The day which would be the last of the year for the Anchorage began normally enough with Gary Duffy walking the dogs – Ebony and Ivory. But the night ended early the next morning when the door was closed to the public for the rest of the year, possibly forever. At least things there will never be the same again.

The dogs, which a customer had left as pups a year earlier, adopted the Anchorage as their home, just as many of the bar’s patrons later ended up working there. Duffy, resident caretaker, bartender and collector of old and odd things has practically kept the place together just to keep the bartenders working.

Hank, Pat, Tom and Joe would all be on hand at some time throughout the day as friends and longtime patrons drifted in to pay their respects as word of the closing spread through the neighborhood. Odds were given on when and if the place would be permanently closed, uprooted and moved down Bay Avenue to the vacant lot beside the causeway to Ocean City, where Orsatti’s and the Under 21 Club once stood.

That is the plan of a group of bankers and businessmen who want to save the century-old historic structure by moving it and constructing something more contemporary on its present site. It is one project that wasn’t conceived at the Anchorage bar; bankers don’t hang out there.

Andrew, the owner, hasn’t been around lately because he’s busy working on his latest scheme, the reselling of the Schuylkill Expressway. After buying up large ton-size chunks of asphalt, certified as “composed of genuine roadway from Philadelphia’s Schuylkill Expressway,” he’s been reselling them as souvenirs on television. The ads feather a Rodney Dangerfield type characters who is pulled to the side of the road and given no respect.

Little about the Anchorage has been getting any respect lately, and it would be in a much worse state of affairs if it wasn’t for Duffy’s handiwork. A premier scavenger who can be found gathering bottles and debris along the shoreline after most storms, Duffy is responsible for salvaging an array of neon beer signs, gadgets and artifacts that some would consider junk. Duffy however, sees something in these items that deems them worthy of appreciation, like the Anchorage itself.

At one time in recent history, the tavern’s F-Troop of regulars began their own private club across the street and called it Ramblewood Cove that seemed to actually appreciate the value of the neighborhood. When Hurricane Gloria swept through a few patrons who took refuge in the bar watched out the large porthole windows as Ramblewood Cove was swept away. The Anchorage was left intact. Then a full 12 hours later, just when it seemed like everything was okay, chunks of brick from an upstairs fireplace came crashing through the tavern’s ceiling, an omen that the chips may fall when least expected.

Non one is around anymore who remembers when the place went under the names engraved on the silverware Duffy dug up in the basement sand. Only the last 50 years are recalled by living witnesses, and only the last 30 are recalled in the lively stories and outrageous anecdotes that are best told by one of the half-dozen regulars who might sit at the front bar. They take turns buying rounds for everyone, including strangers, and propose a toast, sparking a story that has been told so many times everyone at the bar breaks up laughing as soon as it begins.

Some of the stories are being transcribed for posterity however since the Anchorage figures in three novels penned by Vietnam veterans. Bartender Hank wrote Bars, now being edited for publication. Neighbor John McGonigle is completing a novel about his experiences in Vietnam, and Lynda van Devanter, a nurse and former Anchorage patron, fondly recalls losing her virginity in a room above the bar in her recently published book Home Before Morning.

In the chapter Dunes ‘til Dawn, Van Devanter recalls how, after graduating from nursing school in Philadelphia she worked at Shore Memorial Hospital and met her first love.

“He came up to me at Bay Shores, a night club in Somers Point, New Jersey, and asked me to dance,” she wrote. “We went out to dinner together, walked on the beach in our bare feet and laughed at the silliest things. On weekends we would party with my friends and their newly acquired boy friends. We’d start out at the Anchorage, a neighborhood bar that offered seven beers for a dollar, and leave there about 10 o’clock to go to the other bars where the bands played – Bay Shores and Tony Marts. We were college kids striking out on our own, having one last fling before settling down to a career and family.”

Van Devanter describes how, on Labor Day, the last day of summer, her and her boyfriend decided to do it, but all the motels and hotels in Ocean City and Somers Point were booked solid, so they returned to the Anchorage to cry in their beers. Then someone introduced them to the owner, Andrew, who gave them a key to a room upstairs, where some of the bartenders lived.

She describes the upstairs as, “One of the all-time sleaziest rooms in the world. It had boxes piled all around, a dirty mattress without any sheets, and a single light bulb hanging directly over the bed. Outside the window was a neon sign that kept blinking on and off.”

“I’ve waited 21 years for this, I thought, only moments before I had the quick sharp pain that marked the end of my virginity. I think it happened when the neon sign was off. Or maybe it was on. It was hard to tell because the damned thing flashed so quickly. I guess I must have been in love.”

The neon light is now off, and the jukebox is quiet. But the songs that played on the last night the Anchorage was open weren’t much different from those that played there over the past 20 years.

It’s one of the all-time great jukeboxes anywhere, with a mixture of Jimmy Buffet tunes sprinkled with classic oldies – Dion’s “Runaround Sue,” the Isley Brother’s “Shout,” and Bobby Darin’s “Mack the Knife,” offset by the most popular “Penny’s from Heaven” and Springsteen’s “Glory Days.” The last seems appropriate now.

The Anchorage, the last of the Bay Avenue nightclubs, has seen its glory days. It will either reopen briefly in January before being moved, or the move will be postponed until next fall with the bar maintained in its present condition for yet one more summer.

In any case, someday soon, what the owner Andrew calls the dinosaur of Bay Avenue will someday become extinct.

Posted by William Kelly at 3:29 AM