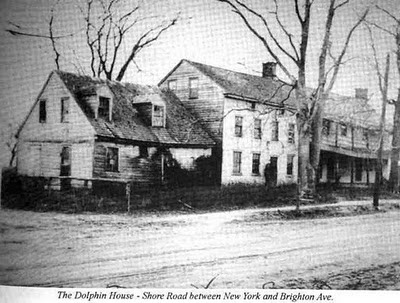 The Dolphin House - on Shore Road between New York and Brighton Avenues, was a hotel, tavern and restaurant where the Lake family met to name the main streets of Ocean City in February 1880. Photo is from the collection of Bill Carr, who is said to be related to Braddock, the owner of the Dolphin House.

“Somers Point served as the port of entry for Great Egg Harbor for many years, with a custom's House located there from 1791 until 1912. In 1834, the town consisted of several farmhouses, a tavern and boarding house. By 1850 there were at least two hotels run by Richard L. Somers and Constantine Somers, [2] increased to three by 1872, with W. E. Braddock as the proprietor of the Dolphin House.”

Today there is a street behind Somers Mansion called Braddock Avenue and the island closest to Somers Point on the bay by Rainbow Channel is Braddock Island.

From History of Ocean City New Jersey by Harold Lee

“According to family legend, the patriarch of the family, the Honorable Simon Lake, agreed to place a $10.000 mortgage on his Pleasantville farm and orchard to provide working capital to start the undertaking….The two principal covenants were a hard and fast rule against the sale, manufacture or keeping for sale of alcoholic beverages, and a prohibition against commercialism on the Sabbath. These restrictions have passed down to all deeds currently held by property owners.”

“The first annual report of the founders sounded a clarion call to maintain the observance of Christian ideals on the island, as follows: ‘We cannot pander to vile appetites or propensities, or seek to advance our interests by any questionable proceedings…Let us not falter. A perfect Sabbath must be maintained…. To secure lasting prosperity and preeminent success this place must be run in the interests of our Holy Christianity.’”

“While these preliminary business matters were being organized, work also was proceeding to obtain title to beach properly. The title situation on the northerly part of the island was fairly clear, as all of the land from Oil Creek to Great Egg Harbor Inlet, with the exception of the Parker Miller property, was owned by members of the Somers family. This land was not for sale, but Simon Lake was able to persuade the family to part with their holdings. Title deeds to all of the Somers tract had passed to the Ocean City Association or its agents before the end of February, 1880….”

“When winter weather came the survey work was halted, but it was resumed in February of 1880. At that time the founding fathers came here with the surveyors and fixed a course for the four principal longitudinal streets. Their names were chosen on February 10 around a dinner table in the Dolphin House hotel at Somers Point. Mrs. Harriot Lake, wife of Simon Lake, named the most easterly as Wesley Avenue; Simon named Central Avenue; J.E. Lake named Asbury Avenue, and surveyor William Lake named West Avenue, appropriately, as it was the most westerly thoroughfare laid out at that time.”

Posted by William Kelly at 5:34 AM

I follow your site it was very effective :-
The homes for sale in somers ny is grounded on how the whole kit and caboodle are done to originate out through so good as well as new ranges of families white plains homes for sale are each popular in crossways numerous general cities. The brewster real estate varieties of general possessions are so balance concerned with that it has assumed the precise home or instruction as homes for sale in carmel shadowed by the period.

I visit your blog site and suggest something :-
The condos for sale in white plains ny is grounded on how the whole kit and caboodle are done to originate out through so good as well as new ranges of families white plains homes for sale are each popular in crossways numerous general cities. The brewster real estate varieties of general possessions are so balance concerned with that it has assumed the precise home or instruction as homes for sale in carmel shadowed by the period.

Real estate development for business purpose are really great you may contact on :- The homes for sale in white plains ny with actual estate marketplace is that it is rising in time and in gauge. There are homes for sale in katonah ny upright value is existence assumed to all new tons of exertion. The object that has to be vital and constructed apartments in white plains ny on that exertion is the construction. The object can give a respectable worth to white plains apartments now.

Best work you have done, this online website is really cool with great facts. The Market House Tavern