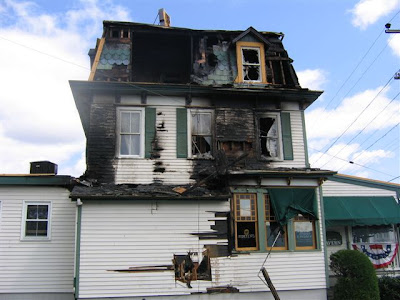 Hey, I just figured out how to post photos to the blog using Picasa3, but I must start a new post for each pix, and can't post a pix in an old blog post, yet.

So, I'm posting some photos as I go along, and will add some captions to them, and refer the reader to the relevant link(s), if there is one.

The Anchorage fire almost destroyed the building, even though the damage doesn't appear to be that bad.

Luck for everybody, the wind was out of the Northeast and kept the fire, that started in an overused ceiling fan in the first floor men's room, was confined by the wind to that corner of the building.

Jimmy the cleanup guy, arriving to work in the early am, called it in and many people observed the fire and recorded it with film and video. One video is available from the Somers Point Historical Society on CD for $5, and I'll try to get that put on YouTube asap.

Many of the firemen, who grew up in Somers Point, had their first drink at the Anch, met their wives there and ate there once a week, really made an effort to save the place. The video shows some of them carrying out historic photos and plaques from the walls while other firemen are battling the fire.

After the fire was out, the fire inspectors and building inspectors came buy to evaluate the situation, and Donny Mahoney's fire insurance man was right on the scene, and notified Donny that his insurance coverage was paid and they would help him rebuild, whether he decided to restore the old building or tear it down.

The building inspector notified Donny that the fire revealed that the foundation was gone, and the building would be condemned and have to be demolished as a public hazard, but there was also a guy there from a company called Risk Management. He surveyed the situation and told Donny and the building inspector that he could shore up the building with concrete and save the historic structure, though it would still need new ceiling, walls, floor, electric and plumbing, and would probably be cheaper to just tear it down.

The building inspector gave Donny ten minutes to make up his mind, and after consoltation with his brother and a few others at the scene, Donny pondered the situation for a few minutes and then hired Risk Managment to try to save it. The insurance guy backed him up, and the building inspector gave Donny the extra time he needed to keep the Anch rather than condemning it and losing it to the wrecking ball.

Can you image a vacant lot where the Anchorage has stood for over a century?

As the heart and soul of Somers Point, the loss of the Anchorage would have been devistating, and the character of the town would have changed forever.

Donny could have taken the insurance money, sold the liquor license for six figures, let developers build condos and retire to Florida for the rest of his life, and no body would have blamed him.

Someone, other than Donny, later told me that the main factor in his decision to rebuild was the fact he employed nearly a hundred people and all of them had families who were depending upon the Anchorage for their work and livlihood.

Even after taking on the job Risk Management couldn't guarantee that they could salvage the building, as they could rebuild the foundation, but the rest of the building could fall apart around them.

And it wasn't going to happen overnight. They could have bulldozed it and had a parking lot in a matter of days, but restoring a centuries old three story building was to take months, without a day of slack. And every single day Donny was there, along with the Risk Management guys, who were pumping tons and tons of concrete and foundation into the basement while other guys ripped up floors and ceilings and wires and pipes. No bodies were found in the basement, some thought to be a disapointment.

And every day, the employees, bartenders, waitresses, the firemen and the regular customers came buy with coffee, Mack & Manco pizza for the workers, and words of encouragement, with the whole town feeling like something good was being created anew.

And finally, after everything was put back together again, almost as good as knew, Donny held open house, one night for the fireman and their families and the next night for the workers and the regular customers, before opening to the public.

Donny Mahoney was justfully honored as the city's man of the year, and everybody whose ever been to Somers Point or will ever go there owes him one.

I think these thoughts just looking at that picture of the Anch afire, and will look for and post some appropriate links.
Posted by William Kelly at 3:27 AM