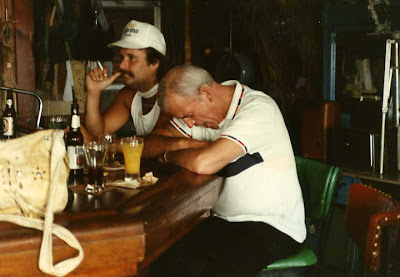 Timmy Hunt, plotting his next move, and Vince Renich in the waining days of the Old Anchorage.

RENNICH, VINCENT F. "Vin Vin," 67, died Saturday at Shore Memorial Hospital. Born in Philadelphia, PA, he was an area resident for 46 years and local bartending legend at Gregory's Restaurant and Bar for 42 years.

He served in the Korean War in the First Calvary and was the recipient of the Bronze Star with Oak Leaf Clusters and two Purple Hearts. Mr. Rennich was a graduate of the school of hard knocks, loved to travel and had a zest for life. Lived each day as his last.

A Mass of Christian Burrial will be held on Wednesday at 10:30 AM at St. Joseph's Church, Shore Road, Somers Point. Interment Seaside Cemetery, Palermo.

Born in Philadelphia, Vince attended Catholic school in Germantown where the nun's discipline served him well when, as a teenager, he enlisted in the Army and was assigned to the 1st Calvary Division in Korea.

Few people knew he earned a Bronze Star with Oak Leaf Clusters for bravery in combat and two Purple Hearts before he returned home for Christmas, 1953. That's when his mother introduced him to their Main Line neighbor John McCann, the beer barron, who offered Vince a job at his Somers Point nightclub, Bay Shores.

Vince said he never considered being a bartender until McCann offered him the job.

"Where's Somers Point?" Vince asked McCann, who said, "Throw away the books, you're going to get a real education."

"And he was right," Vince said, "you wouldn't believe what I've learned behind the bar."

Driving into the Point around Easter, 1953, Vince helped clean up the place since it was a seasonal place, closed since the previous Labor Day weekend, and started out as a bar back for $10 a day, plus tips, which he said went a long way when beers were 10 cents and mixed drinks a quarter.

Living above the club in a room with a view of the bay, Vince worked nights during the Bay Shores halcyon days, and often recalled the bands who played there at the time - MacNamaara's Band, Rocco & the Saints, which included Frankie Avalon and Bobby Rydell, and Mike Pedicin, Sr., who played Vince's favorite song, "On the Way to Cape May."

When Bay Shores closed in the fall, Vince, like many of the other bartenders and waitresses at the shore, went to Florida to work the hotel bars and restaurants there. In Florida Vince hung out at the Gulf Stream Race Track and the Hollywood Florida, Elks Club.

After marrying "Dot," and with a son on the way, Vince stayed in Somers Point one winter, working first at Steel's Ship Bar across the street from Bay Shores, and then started working steady at the bar of Gregory's Hotel on Shore Road.

Gregory's was still renting rooms upstairs at the time, and "Pop" Gregory was still around, cooking snapper soup and scrambled egges in the kitchen, and shucking clams was part of the bartending job.

Vince Rennich was a bartender at Gregory's during the Classic Era, working behind the same bar with his brother, Dave Lefko, and other legendary bartenders - George McGonigle, Charlie Carney and Ed Margum.

The seasons flowed into years, decades came and went, prices increased and styles changed, but Vince remained pretty much the same behind the bar at Gregory's. Vince met and made many friends over the years, many of whom stopped by to see him as soon as they got to town.
Posted by William Kelly at 1:49 PM