Carmen and Nancy Marotta on the AC Boardwalk 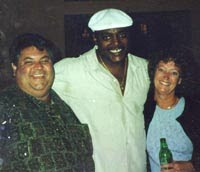 Carmen and Nancy with the late Herman "Roscoe" Ernest.

Read Carmen's tribute to Roscoe in the AC Weekly : http://blogs.atlanticcityweekly.com/ac-central/tag/carmen-marotta/


Carmen and Nancy Marotta are back on the boardwalk in Atlantic City, helping produce a series of concerts at Kennedy Plaza this summer.

While the Chicken Bone Beach shows have been going on for a few years at the same location, the Mardi Gras Marotta is promoting is relatively new and successful because of the exceptional talent brought in by Carmen and Nancy.

Carmen literally grew up in the music business since his father was the legendary Tony Mart - Anthony Marotta, who took a small Somers Point rathskeller and made it into the "Showplace of the World."

After Tony Marts was sold, Carmen opened The Classic American Cafe in New Orleans with Levon Helm, of the Band fame, where he made the acquaintance of all the jazz greats. He then dabbled in politics for awhile, but kept his fingers in the music business by helping to book good shows for the annual Good Old Days Picnic and Friday Night Beach concerts at the Point's municipal beach.

Although there's still some bars, clubs and cabarets that feature live bands, most of the best action this summer is taking place out doors, in public, and they're also great places to take the family. Plus they're free, thanks to the local institutions (Like the Somers Point Recreation Dept. and Atlantic County freeholders, and other sponsors), who picked up the slack to make these shows happen.

Carmen and Nancy aren't new to Atlantic City either. Actually they are coming back to the old Hood, err Wood, since Tony Mart got his start selling hot dogs and hoagies on the boardwalk, and his wife's family started the famous White House sub shop.

"Some of the hottest, new cutting edge music in these genres is coming out of New Orleans," says Carmen. "You have these big jam bands, like Dave Matthews and some of the other bands that are playing at the Dave Matthews Caravan, and they are influenced by and their mentors are people like the Neville Brothers and George Porter Jr."

"We're starting earlier, and we were able to build on the success of last year's shows. Last year was our first season, and we were only able to do eight, but this year, we felt confident enough to plan 13."

Chicken Bone Beach is what the locals affectionately called the beach patronized by blacks during segregation, and was popularized primarily by the bar tenders, waitresses, cooks and musicians from the Kentucky Avenue Clubs who had been up all night. Sammy Davis Jr., his mom, Dizzy and Duke were all there, and the chicken came primarily from Jimmy's Joint, just across the street from the legendary Club Harlem, now a parking lot.

Then there's the Somers Point Beach concerts, which start at 7pm every Friday night all summer long. Don Kinsey and the Kinsey Report kicked things off last Friday. Just bring a beach chair and sit back and enjoy.

August 19 Curtis Salgado Soul Band:
The Man who taught the Blues to the Blues Brothers with his World Class 9 Piece Big Band

Begins June 17th At The William Morrow Beach / Municipal Beach Park, Located Between Higbee And New Jersey Aves On Bay Ave in Somers Point. Free shows Fridays Start At 7PM, From The Third Friday In June Until The Second Friday in September. Hosted By: The Somers Point Recreation Department.