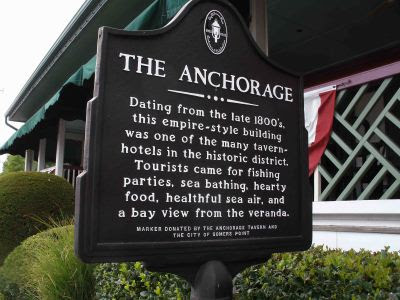 Brief History of the Anchorage Tavern from the back of the take-out menu.

The Anchorage Tavern is the oldest, continuously operated business establishment in Somers Point. Built (circa) 1874, it was first known as the Trenton Hotel and catered to seasonal visitors, mainly fishermen and bird gunners who took on the hunting of birds as a sport. Ducks were sold to restaurants while the feathers of other birds were used to adorn hats that were a fashion in those days. The sheer numbers and variety of the avian species produced the bird eggs that inspired early Dutch explorers to give Great Egg Harbor its name.

Known as the Anchorage Hotel since 1888, Victorian era spindles once lined the porch, and at the turn of the century the ballroom was built as an addition. For a time the hotel catered to the New York and Philadelphia society, when men dressed in tuxedos and women wore long gowns to dinner and strolled on the porch to enjoy the summer breeze.

In August 1905, as can be seen by the newspaper clipping on the wall, Daniel Reagan, the proprietor at the time, advertised “cheerful rooms,” for $8 and $10 a week, with “fish, boating and bathing” being the primary attractions.

On a Sunday morning in 1910 the pastor of St. Augustine’s Church in Ocean City took the steam ferry to Somers Point, walked down Bay Avenue and served the first public mass on the bar in the ballroom of the Anchorage Hotel. Charles Collins was the owner of record at the time.

The Anchorage was not always a saintly haven however. Prohibition rum runners used the same small inlets and side creeks that were once used by pirates, smugglers and Colonial revolutionary militia. The rum runners found Great Egg harbor a friendly port and the Anchorage Tavern a popular watering hole. At times the Anchorage was known to sport slot machines and its patrons were known to enjoy games of chance.

For awhile the bar was owned by Judge Larry Brannagan, who was known as the local Judge Roy Bean and “the law east of Patcong Creek.” Hannah Somers, a descendent of the town’s founding family, was also a proprietor for many years. Her longtime bartender, John Coyle kept a parrot named Teddy, which picked up an atrocious vocabulary from the locals at the bar.

After prohibition, the Anchorage was issued the fifth city license C-5. In 1938, the hotel was purchased by Lucille Cornaglia Thompson, who operated the hotel and bar until she sold it to her brother, Andrew “Henry” Cornaglia in 1945. The Three Keys, who once performed before the Queen of England, were the house band for many years when the Anchorage was known for its find Italian pasta and sauces.

With the death of Mr. Cornaglia in 1965, his son Andrew assumed the business and he attracted a new, younger clientele who enjoyed playing pool, shuffleboard and the juke box. The younger crowd made it a tradition to meet at the Anchorage before heading out to Bay Shores, Tony Marts, Steels and other establishments that featured rock & roll bands. The Anchorage became famous for serving seven beers for a dollar and the 7 for 1 T-shirts are now collector’s items.

The William Morris family acquired the Anchorage in 1993, restored the building, upgraded the kitchen and kept the nostalgia alive.

Don Mahoney, who had previously ran the kitchen for a number of years, purchased the Anchorage in 1999, and continues to serve good food and drinks to a new generation of patrons as well as those who return to remember the good old days.

The Anchorage Tavern, a Jersey Shore legend and tradition for over a century.

The greatest place to meet your mate! Met my hubby-to-be here =)