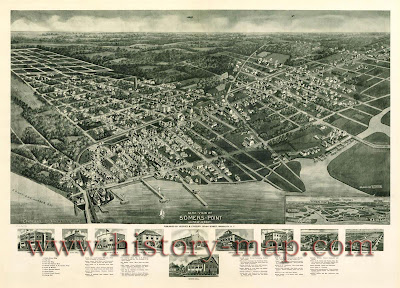 As it has for centuries, Somers Point has provided fine fishing, boating, sailing, dining and entertainment for both area residents and visitors alike.

Situated just across the bay from dry Ocean City, Somers Point has been allocated more than its share of liquor licenses, and boasts many good bars and fine restaurants, and is known especially for locally caught, fresh seafood.

It has been said that “Somers Point is a drinking town with a fishing problem.”

Founded by Quaker families as a self-sufficient plantation over three hundred years ago, Somers Point is located on Great Egg Harbor bay, a safe harbor that takes its name from the large numbers of bird eggs found by early Dutch explorers. The inlet, bay and Egg Harbor river waters have continually served sailors, fishermen, hunters, crabbers and clammers since colonial times, and for the local Indians, for 10,000 years earlier.

Natural attractions include the High Banks at Kenney Park, overlooking the bay and barrier island of Ocean City, which provides a public boat ramp, picnic tables and other facilities and is where the annual Good Old Days picnic is held on the weekend after Labor Day. Greate Bay Golf Club, a championship course designed by the legendary Scotsman Willie Park, Jr. is over the bluff.

There’s also a municipal pier at William Morrow beach on Bay Avenue, where Bayfest is held in June, a classic theater and movie house that is undergoing restoration, and thriving marinas that feature an annual boat show.

Many fine restaurants and nightclubs enhance the Historic District and make for a popular, chic residential neighborhood in a community that also boasts fine schools, churches and Shore Memorial community hospital.

The historic restorations of the Anchorage Tavern, Mayer’s Inn and the old City Hall, now the town’s library, have significantly maintained valuable traditions that allow new generations to experience the same venues as their parents and grandparents.

The spirit of the old rock & roll joints – Bay Shores, Tony Marts, Mothers and the Dunes, now lives on at new places that feature live music and every Friday night all summer when free concerts are held under the stars at the William Morrow municipal beach.

Gregory’s, Charlie’s and DiOrio’s are three local bars and restaurants that are operated by a new generation of the same families for over a half-century.

The bars, restaurants and music all seem to fit with the boats and marinas to make for a unique neighborhood that has undergone many changes over the years, but maintains that small town charm on the bay.
Posted by William Kelly at 1:30 AM

Labels: "A Drinking town with a fishing problem."