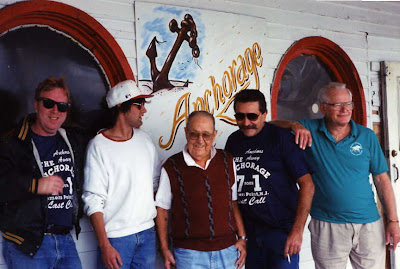 This picture was taken on day after the Old Anchorage had its last night. I stayed overnight at Wolfman's house down the street, and walked back the next day and started cleaning up, as the place was totally trashed. Somebody else came along and just started helping me fill trash bags and sweeping the floor of debress. There was a few cases of beer left, and some of the liquor bottles still had some liquor in them, so we polished that off while we cleaned up.

One by one, the bartenders came by - Ed Margerum, the old morning guy, five days (I did the other two), Boston Rick, Bruce the Beard and Charlie Carney, so somebody had us go out to the porch for a picture. (Thanks to John Guzak for the pix, and some of the others).

Joe Crean came by on his Harley, and I remember Jimmy Care was there, and Andrew stopped by and thanked us for cleaning up. And we all sat down and polished off what was left of the booze.

While Ed, Bruce and Charlie have all passed away, Boston Rick is still working as a bartender in Old City Philadelphia, at a heavy metal bar on South Street the last I heard. He's a real pro, along with Carney. The rest of us were amateurs.

Not in the photo, the other bartenders at the end were Nick Trofa, Sue and Pat Pierano (I know I spelled that wrong Pat, but I'll get it right).

Smartly is still there. You can go and ask him.


CARNEY, CHARLES F., 77 OF Somers Point, died peacefully on February 18, 2006. His daughter Colleen, son-in-law Dvid, Carole and his good pal Andrew were at his side.

Charles was a legendary bartender in the Somers Point area. He began his career at Steel's Ship Bar, went on to Mac's, Gregory's, Mother's, The Med, The Shangri-La, Crab Trap and the world famous Anchorage.

Charles is the brother of the late Frank. He is survived by his brother George (Violet) of Collingswood, N.J., his children Charles and Sean of Miami Beach, FL; Colleen (David) McIlroy of Sunset Beach, CA and is partner and soul mate Carole Rubino of Somers Point.

Relatives and friends are invited to his viewing Wednesday, Feb. 22, 2006 from 9:30 to 11 AM, St. Joseph's Church, 612 Shore Road, Somers Point. Followed by a Mass of Christian Burial at 11 AM. Interment Seaside Cemetery. In lieu of flowers the family requests memorial contributions to the Don MacBeth Memorial Jocky Fund. P.O. Box 18470, Encino, CA 91419. Arrangements by Terranova Funderal Home Inc. www.terranovafunderalhome.com
Posted by William Kelly at 1:39 PM

I remember popping into all these places. Does polock annes still exist? We had our own bars on LBI. Year round classics like the Gateway, Kubels, Buckalews, Porthole. Not as much fun being politically correct. No smoking, only drink a couple so you don't get arrested. The days of a good bartender are near the end as good bars close or change. Regards to leo.. Mike S

are there any photos of nick or frank j trofa? or joe brennan for that matter... geez