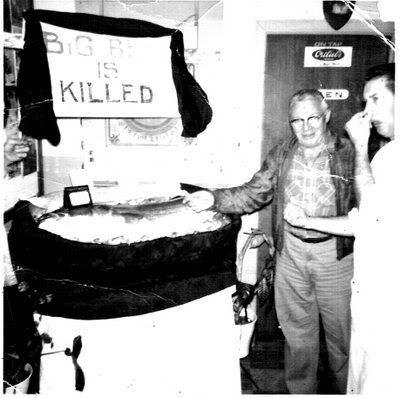 A TALE OF TWO STRIPERS – A TRUE FISH TALE

Funeral for Maury Upperman's world record striper at Gregory's in Somers Point. (above)

Albert McReynolds broke that record with one of his own, and one that still stands today.
(left)

Maury Upperman and Albert McReynolds are not terribly well known to most people, but they are legends among fishermen who know their stories are true.

The current and previous world record striper fish were caught off the South Jersey shore by local, fishermen Maury Upperman and Albert McReynolds, one from a boat and the other from the end of the Atlantic City jetty during a N’easter.’

Roccus saxatilis, as it is refered to by scholars, is better known as a rock fish, or locally as a striper, because of the beautiful multi-colored brown and blue scales that run lengthwise along its body.

The striper is prized, not only for its beauty, but its size, fighting spirit, filet texture and taste. It is the filet mignon of fish, except it can’t be bought in seafood markets or restaurants at any price.

Because of its popularity, the striper was over fished, especially by commercial fishermen at sea in nets, and the Atlantic States Marine Fisherman’s Commission officially declared it a sporting fish that only sports fishermen could fish for with rod and reel.

A sixty pound striper could be over five feet long, as big as a man, with the largest recorded striper being 125 pounds, probably over 40 years old, and caught by commercial fishermen off Massachusetts. Local commercial fishermen out of Atlantic City and Cape May say they have caught stripers over 100 pounds but must release them by law.

Although it once almost disappeared completely, the Indians would be happy to know that - like the bald eagle, black bear and wild turkeys, the striper has returned, but not in great numbers, so it is still a rare and hard to catch.

Striper was served at one of the first meals that the local Indians shared with European settlers, and how to catch them was one of the first survival skills learned and passed on from one generation to the next. Stripers caught in local waters, provided by local rebels, were one of the staples in the diet of Washington’s army during the revolution.

They were once so plentiful that they were used as fertilizer.

Now they’re prized as a rare local delicacy, one you can’t buy at any price, and can only enjoy if you know someone who caught one.

To a fisherman, one striper is worth a hundred blue fish or flounder, and your striper fisherman is not your typical recreational fisherman who takes a boat out for a weekend afternoon when the weather’s nice to enjoy a day on the bay and if they’re lucky, catch some fish.

For serious striper fishermen, there’s no luck involved. Some recreational fishermen have caught the bug and taken up the hunt for a striper, some have even made it their avocation, and some have tried and never caught one.

Hot fishing spots are a fisherman’s biggest secret, and those who are successful at it try to keep their secrets to themselves, but how to catch a striper is no secret.

According to those who know from experience, much of it is in the timing – the time of year, the time of day, the tides, the period of the moon, the water temperature and weather conditions all play a part in whether you catch a fish.

You also need some basic equipment, a good rod (Fenwick) and reel (Penn), 25 pound stern line and bait, of which there are many varieties

Because the striper is at the larger end of the food line (next to man), it eats practically anything. It cruises with its mouth open and takes in whatever is in its path, but rejects what is not familiar or not tasty. If it doesn’t swallow the hook they usually slip away even after they’re hooked.

Caught back in the Sixties, “Big Ben,” once the world heavyweight striper champion of the world, was weighed in by Maury Upperman and registered 62 pounds, 9 ounces,

It took its name from the name of the handmade bucktail lure Upperman used to catch it.

Brothers Maury and Bill Upperman were brothers who lived Downbeach in Margate, and made their own artificial lures, pouring spoonfuls of lead into small, oval shaped molds they hand painted and attached to a hook and, a lesson passed on from the Indians – fuzzy hairs from the tail of a white-tailed deer.

The Upperman Bucktail lures were popular because they worked, and they worked so well they were marketed and made standard issue as part of US Navy pilot survival kits during World War II.

The day he caught the big one, Maury Upperman was fishing with his brother Bill and three other, local serious fishermen, Clay Adams and Elmer Gregory. They all had their own boats, but on this day they were aboard Ike Beach’s “Rascal.”

They were just off Island Beach State Park, just north of Barnegat when Maury Upperman reeled in the Big One.

Three fifty pounders were also caught and brought aboard the Rascal that day, but Maury’s 62 pound 9 ounce fish became the new New Jersey state and world record.
Dubbed “Big Ben,” the fish was brought back to Elmer Gregory’s Somers Point bar where it sat on black draped buckets of ice, given a proper funeral and viewed by hundreds of worshiping fishermen who stopped by to pay their respects.

The fish was then gutted, its filets enjoyed by the Uppermans and their friends, the hide treated by a professional taxidermist and mounted on Gregory’s wall over the dining room door for decades.

In the middle of a blazing, three day ‘Noreaster in late September 1982, Atlantic City lifeguard Albert McReynolds decided to go fishing. McReynolds knew that stripers chase other, smaller fish, and that during a storm, the striper runs up close to shore. The weather was treacherous, with heavy winds, driving rain and high tides over running the rocks – perfect striper weather.

Setting up his lines in the most precarious place at the end of the Vermont Avenue jetty, McReynolds held on and caught two stripers that night, leaving the one whopper flopping in the jetty rocks while he reeled in the big one, the one that would be the next world record striper.

Just as a golfer needs a witness to certify a hole in one, Atlantic City fireman Pat Urman was also fishing on that jetty that night, discounting accusations that McReynolds actually obtained the fish form a passing commercial fishing vessel that disposed of an unwanted catch. That was just a rumor spread by other jealous fishermen.

McReynolds took his fish to Campbell’s Marina on the Margate causeway, where it weighted in at 78 pounds, 8 ounces and 53 inches, and probably would have weighted more if McReynolds didn’t keep fishing and let it lay on the jetty for awhile.

Even before it was weighed in word spread among the local fishermen and Elmer Gregory, who was with Maury Upperman when he caught the previous record, went over to check it out. Then McReynolds, with bragging rights, went over to Gregory’s where he bought the bar a round.

A plastic mold of the fish was made, and was at the front door of Campbell’s Marina for many years.

To show it wasn’t a fluke, McReynolds went to Florida where he caught a world record shark, and held two world records at the same time.

When Maury Upperman died his family retrieved “Big Ben” from Gregory’s wall, and it has since been eclipsed as number two behind McReynold’s fish. Corky Campbell has McReynolds mount, which currently hangs from the ceiling at the Riptide Bait and Tackle shop in Brigantine.

They did meet one day, when Dick Russell, author of “Striper Wars” was in Somers Point to promote his book.

The book is all about stripers, focuses in on the problems of how legislation has tried to preserve them, and gets into the ongoing battles between the recreational fishermen and the commercial fishermen who want to catch them again.

Dick Russell presented his slide show and gave his talk in Gregory’s dining room one afternoon, so Upperman brought “Big Ben” by and Campbell brought in McReynold’s current world record, and there was a meeting of the mounts.

They were different in some ways, “Big Ben” being a few inches longer, while McReynold’s fish being big fat cow.

But they were both caught by serious, local fishermen on artificial lures, and their world record rankings have endured the test of time, as they still wait for someone to come along and reel in one in that’s bigger.

McReynolds photo: http://www.fishingfury.com/20080411/world-record-striped-bass/
and http://www.striperspace.com/about_striped_bass.html
Posted by William Kelly at 12:40 AM

CASTS: Like a bullet, and fishes right to your feet
TROLLS: Upright and naturally at any depth
JIGS: Full action with just the whip of your rod tip

stephen said...
my name is steve aka thesurfrat dont worry about the stripers pretty soon there wont be any