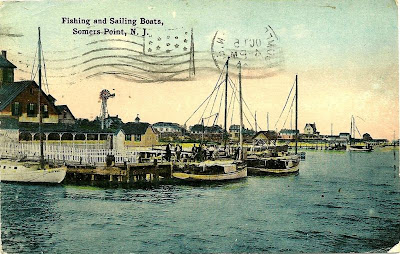 Three hundred years seems like a long time. 1693 was a time as foreign to us as space travel would have been for the people who lived then. In geological and evolutionary time however, 300 years is merely yesterday, a few heartbeats away. In Europe, 1300 years is old, while 300 year old buildings are quite common. For Americans, three centuries is an old as can be, and only a small fraction of the 10,000 years the Lenni Lenape lived here without any technological changes.

It isn’t just the centuries, the decades, the years; it is the generations and the spirit of the people who lived at that particular place over time. It is the succession of people who made Somers Point what it is today.

“The illusion that times that were are better than those that are has probably pervaded all ages,” Horace Greeley once mused. Yet we look to return to yesterday, the better days that we long for. “Those were the days,” and indeed they were special. However, it is a fallacy, I believe, that today is not as good as yesterday, and that are children can never enjoy life as much as previous generations enjoyed it.

Styles change, times change, but certain variables remain. People still like good music; they like to dance, and fall in love with each other; they like the times in which they live. It is the people who make a community and Somers Point, in 300 years, has developed a sense of community that should endure as long as our civilization.

We must strive to preserve what is historic, remember what is good, and like the Lenni Lenape before us, retell the stories of these lives, so a record of our existence and the spirit of our lives will endure forever.

In the end, the treasures of Somers Point are the same today as when they were first discovered by the early settlers. The cool breeze blows off the bay, shellfish and seafish abound, and the small town atmosphere endures.

The legends of the pirates and smugglers, though, are repeated to a new generation, and the myths are carried into a new century. The tales of the secret brick tunnel persist. Some argue the tunnel exists today. It is a passageway, they say, that when opened, will contain the treasure trove of pirates, the Somers’ family jewels and a rum runner’s forgotten stash.

Deeper still are the stone and bone relics of the Lenni Lenape Indians. Beyond that, where the tunnel opens into the sun, are the sparkling Bay waters and the pristine wilderness that existed for hundreds of thousands of years before the first settlers came 300 years ago, just yesterday.

Posted by William Kelly at 3:22 AM