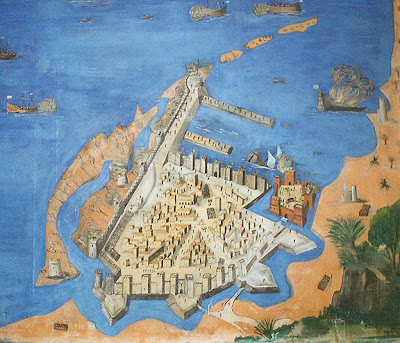 Old Map of Tripoli Harbor shows the sinking of the Philadelphia and the explosion of the Intrepid and the old castle fort.

Martyr's Square (aka Green Square) - Epicenter of the Libyan Revolution

The Arab revolutions that are sweeping across North Africa and the Middle East center around the public square in each city, and in Tripoli, that is Martyr’s Square, which was renamed Green Square when Mohmmar Gadhafi assumed power in a 1969 coup, but will assume its original name of Martyr’s Square after Gadhafi is gone.

But the only real martyrs actually buried at Martyr’s Square are eight American sailors, three officers and five men who died in the explosion of the USS Intrepid in Tripoli Harbor on September 4, 1804.

When President Washington ordered Captain John Barry, the Wexford, Ireland born “Father of the US Navy” to prepare some young men to be officers in the new US Navy, he chose Stewart as his first officer and Somers and Decatur as his Midshipmen.

A reluctant Congress finally approved financing for a Navy when North African Barbary Coast pirates began plundering American merchant ships, ransoming their crews and demanding tribute to stop the practice. Instead, Americans responded with the cry, “A million for defense but not one cent for tribute,” and built a fleet of frigates and schooners to fight the pirates. Somers, Decatur and Stewart served under Capt. Barry on the frigate USS United States, built in Philadelphia, and then were given command of their own schooners.

Lt. Andrew Sterett aboard the schooner USS Enterprise was the first to encounter a pirate ship and won the engagement handily. Lt. Decatur was then given command of the Enterprise while Somers had the schooner USS Nautilas, both capturing pirate prizes, including a ketch they rechristened the USS Intrepid.

Unfortunately, the frigate USS Philadelphia ran aground while chasing a pirate coarser into Tripoli harbor and the ship and its 300 man crew, including Captain William Bainbridge and Lt. David Porter, were taken prisoners and held in the dungeons of the old castle fort.

Under the command of Captain Edward Preble, Somers and Decatur each led flotillas of gunboats against the pirate fleet in Tripoli harbor, and Decatur led a commando team into Tripoli harbor at night aboard the Intrepid, recaptured and sunk the Philadelphia and escaped without any casualties.

The success of that raid led Preble to approve another plan, to outfit the Intrepid with explosives as a fire ship, sail it into Tripoli harbor at night, aimed at the anchored enemy fleet, light a fuse and escape in row boats. But something went terribly wrong, the Intrepid exploded prematurely killing all thirteen men, who were found washed ashore the next day.

Their bodies were identified by the surgeon from the Philadelphia, and buried by a party of prisoners, “one cable’s length” (720 feet) east of the walls of the old castle fort, in two nearby but separate graves, one for the three officers and one for the ten seamen.

Besides Somers, the officers included Lt. Henry Wadsworth (uncle of Longfellow), the first officer, and Lt. Joseph Israel, who had come aboard after they had gotten underway and requested permission to stay aboard, the unlucky 13th man.

They were buried on the shores of Tripoli, and there they remained, until 1930, when an Italian army road work crew uncovered the remains of five of the men. They were reburied about a mile away in what is known as Old Protestant Cemetery, a walled enclosure that also includes the remains of about a hundred others, mainly Christians from various European embassies who died there.

In 1949, the USS Spokane put into Tripoli harbor, and honored those buried at the cemetery site with a formal ceremony, that included a bagpipe band and the mayor of Tripoli, Yousef Karamanli a namesake and a descendent of the Yousef Karamanli who led the pirates two centuries ago.

Throughout the fifties and sixties, the cemetery site was maintained by the Officer’s Wifes Club of nearby Wheelus Air Force base, but the US military were forced out when Mohmmar Gadhafi assumed power in a 1969 coup.

The cemetery site was then forgotten about and was overgrown with weeds and debris when two American tourists stumbled upon it, and wrote about it in American Legion Magazine (May, 1977). The article inspired many Americans, especially veterans and family descendents of Richard Somers and Henry Wadsworth, and they sought the repatriation of the remains of these men and the eight others who are buried in the original grave site outside the castle walls in Martyr’s Square, which Mohmmar Gadhafi had renamed Green Square.

By the 1980s however, the United States was practically at war with Gadhafi, who was held responsible for terrorists attacks against American soldiers in Europe. In response the United States bombed Tripoli, and hit Gadhafi’s tent, allegedly killing his adopted daughter. (She later reappeared after the revolution).

When relations between Libya and the United States later thawed after the turn of the century, members of the Somers family and Somers Point officials personally asked Gadhafi to allow for the return of the remains of these Americans, and he agreed. It was the United States Department of Defense and the US Navy who balked. All of their studies of the cemetery site indicate it was a secured and well marked site, and because the men were honored in the 1949 ceremony, the Navy concluded the cemetery should be the permanent resting place for those men.

Their ruling did not mention or include the original unmarked mass grave sites outside the walls of the old castle fort, which is now Martyr's Square, the epicenter of the revolution, political speeches and public gatherings. The only real martyrs buried there are the eight American naval heroes.

In 2011 however, after the Arab revolution spread to Libya, and Green Square became a rally point for the pro-Gadhafi demonstrators, the original grave site once again came into primary focus, and Rep. Frank LoBiondo (R. NJ) asked for assistance from Rep. Mike Rogers (R. Mich), the powerful head of the House Intelligence Committee.

In April 2011 Rogers, a veteran himself, introduced a House Resolution that called for the Secretary of Defense to do whatever is necessary to repatriate the remains of the American military in Tripoli. And ater the national directors of the American Legion endorsed the measure, Rogers attached the resolution to the Defense Appropriations Act, which was passed by the House in early May and is now being considered by the Senate.

Now that Gadhafi is gone, Green Square has been renamed Martyr’s Square for the tens of thousands of young Arabs revolutionaries who died fighting tyranny, and for freedom, justice and democracy – the same things that Somers, Wadsworth, Israel and the men of the Intrepid died for over two centuries ago.

Now the revolution has made it to Martyr’s Square in Tripoli, remember the officers and men of the Intrepid, and the fact that they are still buried there in unmarked graves, and should be repatriated home so they can be properly buried with full military honors.
Posted by William Kelly at 3:51 AM

I want every herpes patient to please read my testimony, my name is SARAH MORGAN and I am from California in the USA, I contracted genital herpes from my ex boyfriend who never had any symptoms. I have had it for 4 months now., and it has affected my life. I have told my boyfriends who I trusted about it and I have never had a bad reaction, it has affected my new relationships with Smith and people think herpes is really a minor skin irritation herpes has a long term effects on health. The stigma attached to this virus by ignorant people is ridiculous. Most people have herpes in one form or another. I would like to advise people on how I get rid of my herpes and I was reading a comment on the internet,and I saw a testimony posted by a woman from Germany that she get rid of her herpes with the help of DR AHKIGBE and so I was so happy when I saw that post, that his herbal medication is free and I quickly collected the herbal doctor email and I email him within 3 hr he respond to my email and I explain things to him he told me not to worry that he is going to cure me totally with his herbal medicine he only request for little money that he will use to buy the items for the preparation of the herbal medicine, wish I send to him because the pain was too much for me to bear and after some days he told me that he has prepare the herbal medicine, that I should send him my address that he want to sent it to me via DHL or FED-EX that was how I got the herbal medication and I use it as I was told and after few days I found out that my herpes was no more, i went to hospital for confirmation and it was true really that was how i got my cured. DR AKHIGBE also cure other deadly diseases like,  HIV/AIDS, HERPES, DIABETES,CANCER, ALS, ASTHMA, WEAK BODY,  HEPATITIS A&B, DENGUE FEVER, RABIES, MARBURG  DISEASE, THYROID, ARTHRITIS, MENINGITIS ,LUPUS, EPILEPSY, CHRONIC DISEASE, DICK AND BREAST ENLARGEMENT, MALARIA, BACTERIAL DIARRHEA HEART DISEASE., JOINT PAIN, STOMACH PAIN,  DENGUE SCHIZOPHRENIA, POLIO,MULTIPLES SCLEROSIS, HIGH BLOOD PRESSURE, VAGINAL  DISCHARGE,  TUBERCULOSIS, ALZHEIMER , PENIS ENLARGEMENT, PARKINSON'S, to get your rid kindly via his email:   drrealakhigbe@gmail.com    contact his number:  +2349010754824           website:  https://drrealakhigbe.weebly.com       you can still write me on Instagram to get more information. on Sarah Morgan.