Levon & the Hawks at Tony Marts

Levon Helm & the Hawks, just off the road from having toured with Ronnie Hawkins, left Rockabilly Ron but kept the name the Hawks. They were tired from moving around from road house to road house and needed a place to settle down and be in one place for awhile, so their booking agent, Colonel Harold Kutlets, sent them to Tony Marts in Somers Point, NJ.

Somers Point, just across the bay from the dry - no alochol - island of Ocean City "America's Greatest Family Resort," had nearly two dozen bars, nightclubs, restaurants and liquor stores within a few square miles. Tony Marts on Bay Avenue was one of the half dozen rock & roll bars that lined the bay - and was just across the street from Bay Shores, another legendary rock & roll club.

Dressed in suits and ties, the Hawks - Robbie Robertson, Rick Danko, Garth Hudson, Richard Manuel and Levon Helm were considered the House Band and played three sets a night, every night for six to eight weeks in the summer of 1965.

Other bands came and went, as did a number of headliner acts, including Conway Twitty, before he went country.

They lived in rooms above the club, formerly Schicks Hotel - a German Rathskeller bar that Tony Marotta had bought in 1944 with proceeds from the hot dog and sandwich stand he ran at St. James Street on the Atlantic City Boardwalk (where the Irish Pub is located).

Tony remodeled the place a number of times, adding bars and stages each time so eventually there were three stages and eight bars, and they would all be going at once on a Saturday night in the summer when 2,000 people would pass through the doors. 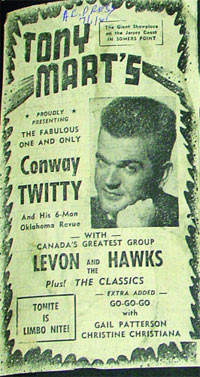 They played through mid-August 1965 when Levon got a phone call from New York. It was Bob Dylan. He wanted to know if Levon & the Hawks would back him for a series of concerts he had booked at Forest Hills and Newport.

Levon later said he had, at that point, never heard of Bob Dylan and asked, "Who else is gonna be on the bill?"

"Just us," Dylan said to the incredulous Helm.

But some of the other guys in the band had heard of Dylan, a folk singer, and the Byrds had made Dylan's song "Mr. Tamborine Man" a hit. Dylan was well known in folk circles, but was not yet mainstream, and he apparently wanted to see what it was like to plug in his acoustic guitar, "go electric" and go with the rock & roll revolution that was in the air.

Legend has it that Dylan came down to Tony Marts and saw the Hawks play, and maybe that happened, but if he did, he didn't introduce himself.

Levon and Robertson and some of the Hawks went to New York and met Dylan and decided that they'd like to try working with him once they met Albert Grossman his manager and Grossman's secretary Mary. Mary was from Canada, and knew the Hawks from their hometown, and when Dylan and Grossman asked her who she thought was the best rock & roll band around, she named the Hawks. Grossman tracked them down at Tony Marts, and though they wanted to play with Dylan they were under contract to play in Somers Point until after Labor Day weekend, the busiest weekend of the summer.

When they explained the situation to Tony, the strict Sicilian grumbled, but he liked the "boys" as he called them, because they were gentlemen who called him "boss," and they played by the rules, unlike the drug-crazed nuts who would shortly follow.

Tony let them out of their contract so they could go off with Dylan, and even threw a farewell party for them.

Tony called Colonel Kutlets and told them that the Hawks were leaving and he needed a new band for the Labor Day weekend, so Kutlets sent Tony a new group - Mitch Ryder and the Detroit Wheels, who were running with a new hit song, "Devil with the Blue Dress On."

Levon and the Hawks moved up to New York and got to know Dylan enough to back him at Forest Hills, a large outdoor tennis stadium, where Dylan at first came out alone with his acoustic guitar and played to the primarily folk music crowd. Then the Hawks came out and tuned up their electric equipment and when Dylan donned an electric guitar they began to boo.

Dylan didn't care, and turned up the volume and played, and eventually the crowd came around, but some of the Hawks didn't like it. Especially Levon, who after a few shows, packed it in and went home saying he didn't enjoy being booed.

But other Hawks stuck around, and played with Dylan at the Newport Folk Fest where they were booed again, and they went to England to play a major festival. When they returned home Dylan was involved in a motorcycle accident, so they stopped playing for awhile while Dylan recouperated at his manager's home in upstate New York at Woodstock, which had been a thriving artists colony for decades.

The Hawks followed Dylan there, and liked it, so they took out a lease on a large, pink, split level house they called Big Pink and jammed in the basement. Eventually the neighbors began to refer to them as "the band," and they sort of just took on that moniker as Dylan healed and began to visit and jam with them. Garth Hudson, the organist and best musician of the lot had a reel to reel tape recorder that he used to record many of the basement jam sessions, tapes that would later be bootlegged as the legendary "Basement Tapes."

Now with Grossman's support, The Band released their first LP - "Music from Big Pink," said to be one of the most influential albums of all time.

They also let their hair and beards grow and took on a down home back country look. 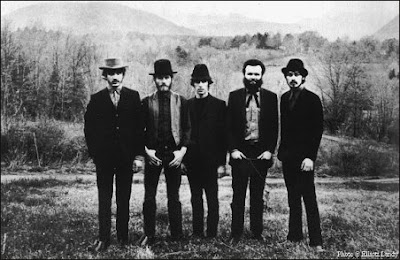