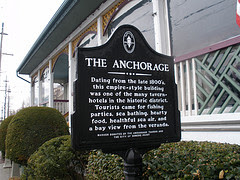 The historic Anchorage Tavern, Somers Point’s oldest continuously operated business has been sold to chef Don Mahoney, who said that he plans no major changes, at least until the end of the summer.

Settlement on the $2.3 million deal was set for last week. That number includes the transfer of the liquor license, which has already taken place.

Originally built for bird gunners and baymen at the end of the last century, some date the building to the 1880s, it was called the Trenton Hotel at first, but the Anchorage name has been maintained for the pat hundred years and it has only changed hands through three families in the past half-century.

Victorian-era photographs show women in gowns and men in suits and ties relaxing on the ornately-trimmed porch during a time when life was lived at a slower pace.

Before St. Josephs church was built, Catholic masses were held in the living room of a private home until 1910 when Father John F. Sweeney, pastor of St. Augustine’s in Ocean City, began taking the ferry boat to Somers Point to say mass in the ballroom of the Anchorage, where there was no shortage of wine for the services.

After Prohibition ended in 1933, the Anchorage was issued liquor license C-5, the fifth legal license and the only one that retains its original name. For awhile the hotel and bar were operated by Judge Larry Brannigan, who was known as the local Judge Roy Bean and “the law east of Patcong Creek.”

From Brannigan the Anchorage was passed on to Charles Collins, “who sold it in 1938 to Lucille Cornaglia Thompson, who sold it to her brother Andrew “Henry” Cornaglia in 1945. From South Philadelphia, Cornaglia and his wife Luci (nee Corcione) made the place famous for good Italian food popular with families. “It was a running joke in the family that she could cook for 120 but not for four,” said Andrew Cornaglia, Jr., who took over the operations of the Anchorage when his father died in 1965.

Although he was only 20 and not old enough to drink, Andrew found himself suddenly responsible for operating the hotel, bar and restaurant. “When my father passed away, I didn’t know vodka from gin, and if it wasn’t for my mother, I would not have been able to sustain the first couple of years.”

While Bay Shores and Tony Marts were famous for the live music, the Anchorage sported a piano that, legend has it, was played by the late, great Nat King Cole, although it was the Seven-for-One draft beers that made the place famous. The Anchorage didn’t originate the idea of serving seven beers for a dollar, but they made it popular and famous with a line of 7 for 1 T-shirts that are colletor’s items today.

Pat Pirano, who worked there during the helicon days recalled that, “I was enthralled to be a 19-year old bartender in a place that was considered a legend to my generation. It was wall-to-wall people and lines to get in, with the fire marshal controlling the crowd at the door. There were 10 bartenders, nine bouncers and two glass-pickers working most nights from 1978 to 1981. Then the drinking age went back to 21, and it took a few years for it go become a local bar again.”

From the days of Andrew’s father the hotel rooms were occupied primarily by bartenders and musicians who worked the other bars and restaurants in town, with the hotel eventually closing in the 1980s and the upper floors shut off.

[See: Lynda Vandevater’s beautiful story of losing her virginity in a second floor room on Labor Day weekend in Dunes Til’ Dawn, a chapter from her book on life as a nurse in Vietnam – which became the basis for the TV program China Beach.]

Andrew Cornaglia, Jr. went on to open Mothers, an all night joint on the Longport Boulevard, and two places in Atlantic City and one in North Philadelphia before returning to operate the Anchorage as a neighborhood saloon in the early 1990s.

Andrew placed the Anchorage on the market with local real estate broker George Roberts, a former Mayor of Somers Point. Roberts apparently accepted a $100,000 down payment on the Anchorage from Bill Morris, without telling Cornaglia about it. Roberts’ subterranean sale of the Anchorage was just the tip of the iceberg, as it eventually was revealed that Roberts had a Ponzi scheme going and was responsible for the theft of millions of dollars in mortgage loans and bogus sales of properties. Roberts was convicted, served some time and was released. Although Andrew contested the sale the courts ruled that he had a legal listing and sold the property to Morris.

Morris didn’t close the Anchorage for a day, but began renovations and restoration efforts immediately, keeping the tavern pretty much the same with the juke box and two pool tables in the back. But he added a fireplace and reopened the ballroom as a dining room. Morris also introduced the then-novel concept of leasing out the kitchen, first to Tyson Merriman, who went on to purchase and restore the Tuckahoe Inn in Beesleys Point, and then to Don Mahoney.

Ironically, Andrew Cornaglia had tapped Mahoney to be his chef when he was trying to purchased the Island Inn on the Longport Boulevrd, but when that deal fell through Mahoney took over the Anchorage kitchen.

With local roots that go back to his early days working in Daniel’s kitchen, Mahoney is a hands-on chef who can be always be found on the job. So, after six years at the held of the Anchorage kitchen, when Bill Morris and his family decided to put the place on the market, Mahoney was already in a position to leverage a deal.

The liquor license changed hands a few weeks ago, while settlement on the property was yesterday, ushering in yet another era for Somers Point’s oldest and most enduring institutions.

As for any major changes, Mahoney said, “I’m not going to do anything until after the summer is over, then maybe we’ll enclose the porch, but if it ain’t broke, why fix it?”

Posted by William Kelly at 3:29 AM