Tony Marts in the 50s 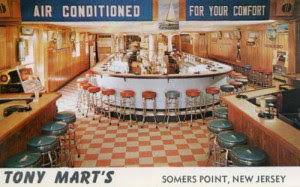 Posted by William Kelly at 2:03 AM

I was a lifeguard at Ocean City 1956,57,58 and found my way to Tony Mart's on many occasions. I wish I still had my Len Carrie and the Krackerjacks Tee shirt. I also saw Frankie Avalon, down the street at Bay Shores, when he was 16 or 17 and just starting to break it big. He was the lead singer of a group called Rocco and the Saints.

Does anyone remember Tito Mambo at Bayshores? First long hair I remember. He did some Screamin' Jay Hawkins bits. I remember the underage kids diving into the bay when the cops raided the place for underagers.