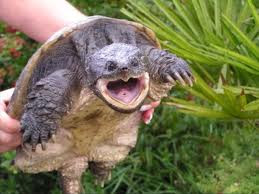 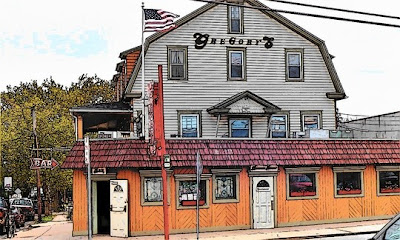 Snapper soup is a real local delicacy and hard to find mainly because snapper turtles are hard to get, mean to catch, sloppy to clean and complicated to cook properly, but those who have been doing it for decades – say over fifty years, keep doing it because, well it’s really good to enjoy and a fine tradition to continue.

You don’t have to be a connoisseur to appreciate snapper, but if you like it, you know where to get it – Greogory’s, the Crab Trap and the Point Diner are three places you can get it locally.

Although there is a white, southern style snapper turtle soup that’s mixed with vegetables, but I’m talking about the local snapper turtle soup recipe that is of a thick, brown gravey, the origins of which can be traced to Old Original Bookbiiners (125 Walnut Street, Philadelphia).

As Craig LaBan called attention to it in the Philadelphia Inquirer (Sunday, June 12, 2005), “We are famous for preserving every other aspect of our history, but why, I wonder, has Philadelphia let so many of its old restaurants drift away? Our dinning scene is many things – youthful, sophisticated…but we have virtually no connection left to the grand restaurants of yore, those brassy old spots where snapper soup tastes as it did when our grandparents tipped the sherry bottle with extra fervor, but we are poorer the fact, and missing a crucial piece of the family puzzle.”

LaBan described the true bill as tasting like “dark as molasses with a trace of fragrant spices and a citrus zest that dances across the sherry-splashed broth like an exotic trade wind.”

While LeBan was critical of the snapper soup when Old Original Bookbinder’s reopened in June, 2005 under the stewardship of John Taxin, he lamented that“…we are poorer and missing a crucial piece of the family puzzle.”

Well, after over a century, if the Taxin family lost the recipe for their original snapper soup, Gregory’s has it.

Just as the Taxin family maintained Bookbinder’s traditions through generations, the fifth generation of the Gregory family is now running Gregory’s in Somers Point. Headed by cousins Walt and Greg Gregory, sons of the late Walt and Elmer Gregory, the sons of old man “Pop” Gregory, the kitchen today is in the hands of Joe and Paul Gregory, graduates of the Culinary Arts Institute at Atlantic-Cape College.

Few people, other than the above gentlemen, know the family recipe for snapper soup, as it was passed on to Pop Gregory from a Bookbinder’s chef back before the war at the original Gregory’s bar in the Kensington section of Philadelphia. Pop Gregory spiced it up a little bit to make it unique, and put it on the menu when he opened Gregory’s in Somers Point in 1946.

Pop taught his sons Elmer and Walter and Rosie Gregory, and they taught Greg Gregory, who remembers when they used to buy their snappers from a Piney and kill them in the backyard by cutting off their heads and letting them run around headless. Then they hanged them from a clothes line to dry them before cutting off the shell and skinning the meat.

One of the benefits of living in these parts is being so close to the Jersey Pines were there is an almost unlimited supply of snapper turtles that thrive in the fresh water cedar lakes.

Having grown up summers on a Mirror Lake lagoon in Browns Mills, in the heart of the Jersey Pines, I know how to catch snapper turtles, as I did it many times unintentionally. They’re pretty nasty devils with a sharp bite and once they get a hold of something its like a vice and they don’t let go. While they prefer baby ducks they pull down from a mother’s brood as it crosses the lake, they are caught on fishing line or in nets. My former neighbor used to catch them and only keep the big ones – two feet or more. If you get one on the dock you give it the end of a long stick to bit and then you can pick it up by the tail, but must be careful that it doesn’t get a hold of one of your fingers.

Now the snapper turtle meat comes pre-cleaned and cut but is still supplied by the grandson of Pop Gregory’s original supplier. It’s a family thing all around.

For awhile Gregory also let a non-family member in on the secret, and before he went to work down at Dolphin Dock, Jimmy Simmons would go by Gregory’s whenever they needed a new batch of snapper soup and prepare it. Simmons was also one of the most prodigious fishermen on Great Egg bay, who caught his share of stripers, but died tragically when a boat he was working on fell off its mount and crushed him.

In any case, making snapper soup from scratch is a very difficult and complicated process, so much so that it’s not really worth it to make it yourself, and just going out to buy a bowl is easier and you couldn’t possibly make it better than they do.

Gregory’s prepares a large multi-gallon pot two or three times a week, depending on the season, and they spice it up to make it a little bit different from the Crab Trap or Point Diner, and have their regular clientele who come in once or twice a month just for the soup.

Served with bread and butter, crackers and a snifter of sherry that’s added for flavor, you have all the workings of a true local delicacy. And don’t eat the bay leaf, that’s only one of the traditional touches. 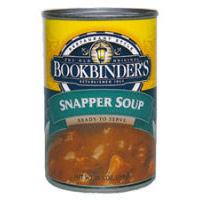 In a shallow roasting pan combine the first 10 ingredients. Bake at 400 degrees for 30 minutes. Push the bones to one side; blend in flour. 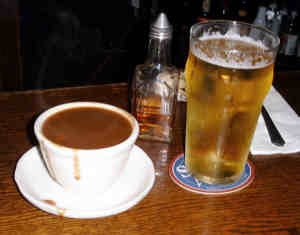 Posted by William Kelly at 4:46 AM

Delicious snapper soup, to die for

Snapper soup at the Oyster Creek Inn, the best appetizer for this Piney Boy!