Andrew and Vince at the bar 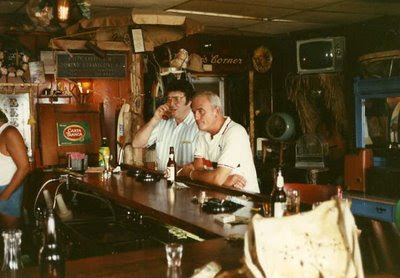 Vince F. Rennich, “Vin Vin” 67, died Saturday at Shore Memorial Hospital. Born in Philadelphia, PA he was an area resident for 46 years and local bartending legend at Greogry’s Restaurant and Bar for 42 years. He served in the Korean War in the First Calvary and was the recipient of the Bronze Star with Oak Leaf Clusters and two Purple Hearts. Mr. Rennich was a graduate of the school of hard knocks, loved to travel and had a zest for life. He lived each day as his last.

A Mass of Christian Burial will be held on Wednesday at 10:30 AM at St. Josephs Church, Shore Rd. Somers Point. Interment Seaside Cemetery, Palermo. Friends may call after 9:30 AM at the church.


Just out of the Army from the Korean War, he was hired by John McCann, the Philadelphia beer baron, and sent to work at Bay Shores, a Jersey Shore resort nightclub that catered to seasonal tourists.

“Where’s Somers Point?” Vince Rennich wanted to know, and McCann told him, “Throw away all your books, now you’re going to get a real education.”

“And he was right,” Vince said to me from across the bar. “You wouldn’t believe what I’ve learned behind the bar.”

Driving into town for the first time around Easter, 1953, Bay Shores wasn’t a hard place to find. The first thing was to get the place in order to open the weekend before Memorial Day.

Opening the closed and shuttered front door they found the place just as they left it last Labor Day.

“There’s still be beers and glasses on the bar as they left them,” said Vince, who explained that in that era, all the seasonal employees – cooks, waitresses, bartenders, even the bands all relocated to Florida for the winter, taking jobs at the seaside hotels and then returning around Easter to work the Jersey Shore in the summer. They preferred Miami, Boca and Fort Lauderdale.

Vince was shown a room upstairs where he could live, or sleep, and he said that it was, “the biggest dump with the nicest view in the world.”

Downstairs the bar that had a dance floor that extended out over the bay, was divided according to age lines, with the old timers in their suits and ties listening to their staid pop bands, while the younger crowd hung out on the other side of the room where there was another stage, where they played that loud, crazy music they hadn’t even give a name yet, but would become known as rock & roll.

The main acts at Bay Shores, at least among the young crowd, was Mike Pedicin, whose song “Shake A Hand” was popular and getting radio airplay, and another Philly band that included a teenager on trumpet, Frankie Avalon, and another kid Bobby Rydell, both sidemen who weren’t old enough to drink legally.

At the end of the summer, Vince visited friends in Florida, then got a job across the street from Bay Shores at Steel’s Ship Bar, which also featured live music, but then he was hired away by old Pop Gregory, who offered him a steady, year ‘round job up the street.

Vince would work at Gregory’s Hotel Bar & Restaurant for nearly a half century, taking seasonal vacations to Florida and maintaining his network of friends, especially his comrades George McGonigle and Charles Carney.
Posted by William Kelly at 9:44 AM