Typical Day at the Old Anch 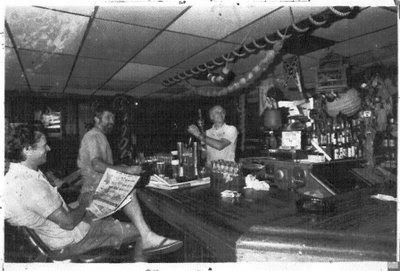 Bill "Boo Boo" Saylor reads a paper with John "Wolfman" McGonigle, both local neighbors sitting with Charles Carney, whose pouring a draft at the front bar.

Although this photo was taken during the day, the tap beer was still flowing, and it was the tap beer - seven beers for a dollar that made the Anchorage famous.

Although other bars had tried to used the gimic earlier, it really caught on at the Anchorage and that's one of the things that made the place popular and famous.

The Anchorage began serving seven beers for a dollar in 1966, Andrew's sophmore year in the school of hard knocks. Although it was a concept Andrew appropriated, he took it beyond the bar by making it a slogan and putting "Anchorage 7 for 1" on Tee shirts that were seen all day long up and down the Ocean City boardwalk and beach, giving the place unprecedented publicity, until the T-Shirts were banned by the ABC - NJ State Alcohol Beverage Control.

"Seven for one" seemed to roll off your lips so naturally, and was served up by bartenders with such flowing, poetic motion to the tunes of "Pennys from Heaven" or "Runaround Sue" that it was almost like a ballet. Set before you in a circle of spilling white topped foam they were never enjoyed alone, and had to be shared, and only cost a buck.

Passed around like a sacrament and toasted in a communion honoring the moment, it was a ritual that baptized more than one generation through the rights of passage that signaled the transition from youth to adult, and the best buck you ever spent.

"No one ordered just seven," Andrew reflected after it was all over. "You would get your orders for seventy - a hundred, and there would always be a bar full of beer, a backup of people who wanted beer, and two bar boys collecting the empies at all times. It was a great scavenger hunt."

Saturday on Labor Day weekend 1970 was the best day ever recorded, when they went through 44 half kegs, which amounted to someone figured out 17,556 beers. They continued to serve the draft beer until 1980, when the cost became prohibitive. It wasn't the cost of the beer however, but the glasses. The beer, either Piels, Black Label or Ortleibs was the least expensive beer on the market, the six ounce pilsner glasses that cost four cents each in 1966 cost 34 cents each by 1980, so another distinctive era came to an end.

For Andrew, it wasn't just about the Anchorage. They say he had a golden touch with turning places around, and before long had interest in five establishments. He bought the old Mug, which had been O'Byrne's and the Purple Villa, and converted it into Mothers, an after hour joint just across the bay bridge on the Longport Boulevard. Named after Peter Gunn's favorite hangout, Mother's featured live bands, had walls and ceilings that were lined with shag carpets and a backroom bar that was Charlie's Carney's private domain. He even had a separate door that you could get in without paying a cover if Charlie gave you a key.

Mothers gave the Dunes some stiff competition and often had the better bands, like Hit and Run and Bobby Campanell and the Shakes.

Andrew didn't stop there, but also had interest in the Bottom Line, an attempt to create a fine Italian restaurant on Pacific Avenue right across the street from Convention Hall. Andrew's family had lived in the neighborhood, and the Bottom Line was strong for as long as Andrew was there.

Just down Pacific Avenue on the corner near the casino was the My Way Lounge, which didn't have any windows, was dark as it could be and only had Sinatra tunes on the juke box.

Then there was the Yorkshire in Jenkentown, in North Philadelphia, which was a local saloon that he made popular.

"The key things that happened to me in my life were basically working hard, lucking out and knowing my brother-in-law Joesph Trecheck."

Trecheck ran the Anchorage for a couple of years while Andrew took care of the other places, but Andrew got rid of them one by one until he was back at the Anchorage, where he started out, and where he met with his motley band of friend, associates, workers and former workers who strayed in on occasion.
Posted by William Kelly at 9:44 AM