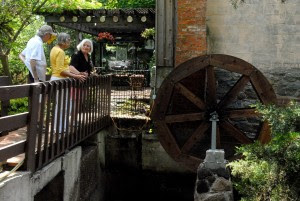 In my article on The President and the Prodigy, the golf prodigy was James "Sonny" Fraser, who I mentioned lived in the house on the hill above the old grist mill at English Creek in Egg Harbor Township, where he had many parties. In the mill pond, Fraser kept lobsters alive and the champagne cold.

When EHT celebrated its 300th anniversary in 2010, the only thing left standing from 1710 was the old grist mill at English Creek.

Here's a story about the mill from Wallace McKelvey in the Press of AC.

EGG HARBOR TOWNSHIP — Like the generations of mill keepers that came before her, Audrey Foster has developed a keen ear for the waters of English Creek.

When the retired civil servant hears the water pounding into the spillway, she knows it is time to adjust the locks that control the flow of water to her neighbors downstream.

Luckily, the “uh-oh” moment has only come once. Last year, she said, the fire department had to come help relieve the pressure of rising water on the floodgate. If the water flows out too fast, people downstream end up flooded; if it flows too slowly during a storm, people upstream are flooded.

Foster will have to retrain her ears.

For the first time in more than a decade, the historic mill on English Creek — which Egg Harbor Township founding father Joseph English’s deed shows dates to 1709 — has been fitted with a waterwheel. Since Foster and her partner, Ventnor attorney Frank Ferry, purchased the property from an elderly couple in the mid-’90s, the old mill has had no wheel.

“The previous owners sent it out for restoration and it never came back,” Foster said. “I guess someone wanted it more.”

A relic of EHT’s agrarian past

Township Historian June Sheridan said the grist mill is the oldest known structure in the township. While the main building has been rebuilt and renovated several times in its three centuries — the last time after a devastating 1919 fire — its foundation dates to the area’s first settlers.

Sheridan said the English Creek mill was part of a bygone industry that — together with shipbuilding — formed the backbone of the county’s agrarian economy. At one time, there were as many as five mills along the creek using the force of flowing water to cut lumber and pulverize corn and grains into flour and meal.
“Everything had to be located on the water, because that was their (power) source and transportation for materials,” she said. “It was a whole different system.”

“(The mills) were the only way they could get grains ground for family usage, so it was one of the major things they needed at that time,” Sheridan said.

Into the 19th century, Sheridan said families would trade crafts or produce for the miller’s processed goods.
Gradually, the mills were abandoned, destroyed by fire or torn down. Of the seven or eight mills that once operated in the area, Sheridan said the English mill is the last one standing.

Historical documents show Smith stopped operating the mill in 1900. But it wasn’t vacant for long.
Documents Ferry — a self-described “house historian” — collected in an assortment of binders indicate that the mill’s next owner, Armand Nichols, wanted to use the waterwheel to generate electricity. That plan was foiled by the 1919 fire, which also destroyed Nichols’ vast collection of antiques and equipment that he had stored there.
While serving as director-general of the Miss America pageant in the 1920s and early 30s, Nichols incorporated the mill, as well.

“He’d bring the girls out here and take (portrait) shots of them around the spillway,” he said.

The mill’s next owner, James “Sonny” Fraser, a professional golfer and state assemblyman, became known for throwing raucous parties at the old mill. Foster said he renovated the building, taking out part of the roof to allow in light for his artist wife. He also installed a well-appointed bar.

“That was the main house,” she said, pointing to the two-story, white building up the sloping hill. “And this was the party house.”

Musicians, politicians and vaudeville performers visiting Atlantic City regularly made the trek into the woods for Fraser’s champagne and lobster parties, drawing attention to the old mill from the social columns.

Fraser died of Hodgkin’s disease at age 34 in 1950, after which the estate was inherited by Fraser’s manservant. But the mill continued to attract celebrities, including Bob Hope, Grace Kelly and a young Cassius Clay.

“It’s so peaceful, but I can imagine what it was like back then,” Foster said. “There’s history all around here.”
The history is literally in the walls. It’s most recent owners found a bundle of love letters between Doris Day and one of her beaus. For propriety’s sake, Foster said she couldn’t reveal the identity of the man.

Sheridan said the old mill’s status as a celebrity retreat was an anomaly in the mid-1900s. Back then, she said the township consisted of a few scattered residential enclaves amongst the farm fields and forests.

“There weren’t many Sonny Frasers in Egg Harbor Township,” she said. “It was like a pass-through place people from Mays Landing went through to get to Atlantic City or Pleasantville, which were more urban centers.”

While most of the roads were paved by Fraser’s time, it was still a sleepy, rural area, said Sheridan, a 75-year-old lifelong township resident.

“English Creek Avenue at that point in time didn’t even have electricity from School House Lane to Ocean Heights Avenue,” she said. “There were no poles because there were no houses to run electricity to.”
A village for a wheel

Today, the mill along English Creek still attracts the attention of drivers speeding down Zion Road toward Mays Landing. If they don’t miss it completely, Foster said many people stop to take a photograph. However, the mill wasn’t complete without a water wheel, she said.

Since she and Ferry bought the mill in 1996, Foster said she’s been looking for a wheel that could move the water from the locks down to the spillway. That search ended last year at the township’s 300th anniversary celebration, when organizer Lynn Wood pointed Foster toward an unused waterwheel just miles from the mill.

“It’s like it took a village making this project happen,” she said.

One of those projects happened to be a water wheel for a Lake Lenape homeowner. When that client sold her house before the wheel was finished, Maul put the wheel up for sale in the newspaper.

The latest batch of Maul’s Jersey red cedar waterwheels, however, had sat unused for more than a year when Foster came calling.

“It’s just amazing,” she said of her handiwork becoming part of the historic building. “It’s a thrill to be a part of it.”
Farmington contractor Scott Warner moved the large wheel — 8 feet in diameter — into place on the side of the building. But when Ferry and Foster realized it was more historically accurate to place the wheel in the center of the building, Warner was tasked with figuring out how to move it 12 feet forward, toward the road.

“To get it as high as it was, we had to build a ramp to get it up there,” he said. “Took three of us out there to lift it.”
Unlike the first settlers, Warner and his crew had fast-setting concrete to build the bog iron piling that held up the wheel’s axle. They stemmed the flow of water and dammed the area around the piling with with blocks and drop cloths while the concrete cured.

Even though it won’t help grind any wheat, Foster said she’s glad that the mill finally has its wheel back.
“The day we moved in we wanted a waterwheel,” she said. “It took some 15 years, but we finally have it.”