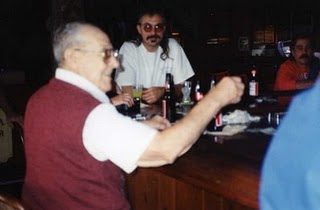 Ed "The Old Man" Margerum toasts his birthday at the Anch. Nick sits behind him.

The last summer at the Old Anch was also the summer that I was researching and writing what would become my first book 300 Years at the Point – A History of Somers Point, NJ.

I had proposed the book to the city and they accepted the proposal but when they got back the contract from the publishers, my friend and colleague Tim Cain was listed as the author. He had already completed his book Pecks Beach about Ocean City, and the publishers didn’t trust me so they gave him the job. I complained, and it was decided for both Tim and I to do the book with him doing half and me half and splitting the royalties.

Then Tim went and hung himself, for reasons unknown, and the book deal was called off, but I was too far into it and continued writing, convincing the city of Somers Point to back me and that I would do it on my own.

For beer and spending money I took on two bartending shifts at the Anchorage, the Wednesday and Thursday early morning shifts that nobody else wanted, the worst tipping shifts of the week. But that was alright with me, as I was just looking for something to do and when it wasn’t busy I could read and write away.

I pretty much had the same clientele as the Old Man, and did the same routine, cleaning up the place and then serving the first, early customers. Bay Avenue is pretty nice in the morning as the sun is coming up, and I’d get a cup of coffee from the breakfast grill across the street, Bayshores II, named after the old and now defunct rock club.

Then one morning, while I was by myself, an old man hobbled in leaning on a cane. He had peered through the porthole window, and I waved to him and he came in and sat down, looking around. “I was just passing by and thought I’d stop and come in and take one last look at the old place,” he said.

I wasn’t sure if he was talking about one last look for himself, or if he had heard the rumors that it was sold and maybe torn down for condos or renovated.

His name is John Mull he says, beginning to tell me his story, “and I just wanted to see if it’s the same as I remember it.”

Mull is now 86, older than the Old Man, and he wants to look through the closed and locked swing doors that lead to the ballroom, but I won’t let him. “It’s too cluttered up with junk back there and isn’t safe I tell him,” but he insists and tries to persuade me.

“I used to attend mass in the backroom,” he says, taking a swig of beer that I poured him.

“I was just a kid,” he continues, “and there were only about 500 people in town then, and we didn’t have a church. Sometimes we had a mass in someone’s house when there was a priest in town.”

Mull said that his father, Harry Mull, who worked at the Bayview Inn, convinced the owner at the time, Charles Collins, who owend both the Bayview and the Anchorage, to let them say mass in the backroom ballroom, then a dining room of the Anchorage.

As Mull remembered, “Father Blake came over from St. Augustine’s in Ocean City. He came over on the Shore Fast Line Trolley, and walked down Bay Avenue to the Anchorage. The backroom was a big room then, with wire backed chairs, tables and a bar against the back wall. I remember the ladies putting the liquor away and placing a white sheet over the bar, which was used as the alter.”

There was never a shortage of wine for the ceremony, and Mr. Mull remembers his brother Robert being baptized on the bar in September, 1914.

“When mass was over, out came the liquor and up went the bar again,” Mull said with a smile.

After Mass the adults left but the kids would stay for Sunday school with Father Blake.

“Mrs. Leeds, the teacher at the one room school house,” recollected Mull, “had a daughter with blonde hair.”

After a pause for reflection, Mull said, “Isn’t it strange what you remember after 80 years?”

Then he remembered he left his wife in the car parked out front, and as he slowly made his way to the front door he explained that they were heading home from the supermarket and the ice cream was melting.

At the front door Mr. Mull stopped, leaned on his cane, turned around and said, “I liked it better as a kid. The bay was full of fish, the mosquitoes were the only problem, and I used to get a kick out of this place.”
Posted by William Kelly at 9:45 AM