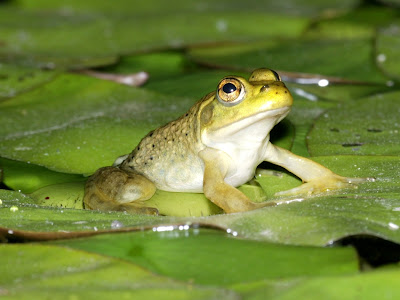 My 51 Ford pickup coasted to a quiet stop. The lights had been shut off a hundred yards back as we needed to slip into the swamp without alerting the quarry. Plenty of bug spray applied liberally above the waste, a couple of flashlights with extra batteries, plenty of smokes and extra matches in a plastic bag, and back in those days, there would be a couple of sixpacks of Bud hanging on me like handgrenades.

We picked up our weapons and stepped into the cool water. I was with Frank and we were two of only the six people I met who were fortunate to engage in this great sport – bullfrogging.

There are many better restaurants which feature these fine eating criters as a delicacy and they sell on the street for $30 a pound. At those prices I could capture about $600 bucks worth on an average night. But I’d rather eat them myself.

I’ve never encountered anyone else in the swamp. No crowds, no Shoobies, no competition, no hassles, maybe another crazy like myself, and a hell of a lot of fun. A calm night, a small boat, or maybe a sneakbox, a burlap bag ad plenty of bug spray.

I don’t take small ones, cause the big ones have a lot more mean and are easier to detect. Amid all the other noise that about at night in the swamps, the unmiskabable sound of “Whooump, Whooump, Whooump,” tells me where the big ones are. They don’t “croak” they “Whooump!” I catch them and then they croak.

The stalk begins. They don’t just sit there and let you pick’em off. And even a small wave will send them to the bottom quick. I’ve don’t the best I can, I’ve ignored a couple of turtles that I’ve stepped on. I’ve ignored a dozen snakes and zillions of mosquitoes. He’s sitting on a Lilly pad, looking at the bugs, getting ready to strike.

Quiet, move slow, don’t move at all, then move quick, the hand is faster than the eye, and he’s in the bag. I’ve got my limit. I’ll be pigging out soon. A nice salad, maybe some fries, corn on the cob and bunch of frogs legs.