The Tunnel at Somers Mansion? 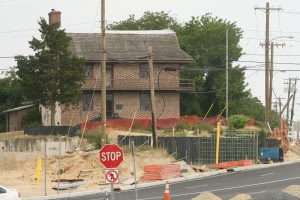 With the reconstruction of the Somers Point Circle the land around Somers Mansion was totally excavated, right up to within a few yards of the building, yet there were no artifacts found or any signs of the legendary tunnel.

The Somers Point tunnel, according to myth and legends, ran from the basement of the Somers Mansion south to the Highbanks, where it let out near the water. It was said to have been used by smugglers, and was supposed to be a secret exit for those in the house if visited by pirates or the British during the Revolution.

Living persons claim that they have seen the tunnel, and there are news reports of it being found, but then again, nobody can find it today.

Ask anybody born and raised in Somers Point and they will tell you about the tunnel.

In 1923, a report in the New York Times wrote about the discovery of a brick tunnel that began in the old Braddock House, that sat on the hill behind Somers Mansion (now a paint store).

“Pirate’s Cave” Not Yet Opened

Efforts have thus far failed to open the underground sealed vault recently discovered by workmen on the old Jeff Braddock property at Somers Point. The property is now owned by Magistrate Lewis B. Mathias with Elmer Steelman now directing the excavations as life tenant.

A few days ago a posthole digger’s spade struck an iron-bound covering of wood. The wood, decayed, fell apart, and beneath was found a solid lid of brick. These brick, when brought to light, proved to be of the antique type imported from Holland by Richard Somers, who founded Somers Point in 1740 under a grant from the British king.

Picks broke a way through the bricks. Below there opened a small square chamber of brick.

Out from this chamber ran this passageway. It was lined with bricks and mortar most carefully laid, thick and solid and strong.

The passageway bored straight toward the present Mathias house. And for the time, the house holds the answer to what lies at the end of the passage. For the residence, built thirty years ago, has no cellar, and its foundations lay flat upon the ground.

But it will be necessary to cut away some of this foundation work before the excavators can go further. So far, they have thrust an iron bur as far as it will reach into the unexplored part of the passage. The bar does not touch the end. The passage from the square chamber of the house wall in about nine feet long, and three feet high, so a man can crawl but not stand in it.

The old Braddock property is the commanding spot of all this section of the coast. It stands high and overlooks all the bay. It was here by all the laws of logic, that the willful wreckers of vessels must have lighted their false beacons to lure the ships to destruction and loot.

It was here that any pirate, scanning the horizon for pursuers, would build his hut, or execute his work of concealing treasure.

Philadelphia newspapers rushed staff photographers to Somers Point this morning to get pictures of the mysterious cavern uncovered by heavy seas which dislodged a section of the bluff along the bay front during Sunday night’s storm.

While the phantasy that the bricked passageway was used as a storage place for Capt. Kidd’s ill-gotten gains sounds well, it is not treasured for an instant by the adult inhabitants of Mayor John M. Campbell’s balliwick.

To the contrary is the general belief in Somers Point that the cavern in an underground passage that two centuries ago extended form the bay front to the old Somers Mansion which was for many years one of the show places of the bay resort. It is known that the old mansion had such exits for use in the event of an emergency but their location had not been known for at least 75 years.

The work of excavating the cavern is proceeding rapidly today and many old-time coins have been found.

About 35 years ago during the progress of a land and real estate boom at the Point, workmen uncovered a foundation, the bricks of which were identified as being manufacture of an early date, certainly of a pre-Revolutionary period. This was on the Jesse Somers property, about where Higbee Avenue passes through. Immediately great excitement prevailed, as a story appeared in Philadelphia, Pittsburgh and newspapers of other cities to the effect that this had been used as a “cache” by Capt. Kidd during the times he put in this section of the Jersey coast. Shovels and picks appeared and a good deal of soil was turned over. But, alas, romance and mystery were dispelled when a member of Capt. Jesse’s family remembered as a child having seen her father’s cattle watered at a well in that vicinity.

However, it is a matter of record that an underground tunnel, made of similar brick, and existed, running parallel to New Jersey Avenue form the bay, to where the Shore Fast Line crosses, which land, was of course, at that time, all forest. Workmen excavating for cellars of houses built on New Jersey Avenue found portions of this tunnel well preserved.

[Thanks to Sally Hastings and the Somers Point Historical Society for the news clip)
Posted by William Kelly at 11:38 AM