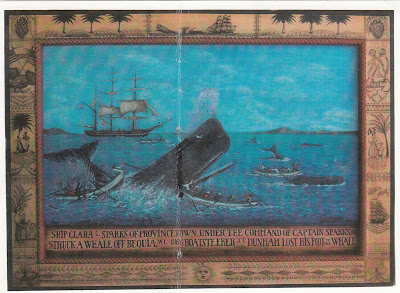 Sam McDowells painting of the whale hunt in the West Indies

Sam McDowell was born in Somers Point but is probably best known in these parts as the owner of the Smuggler's Shop on the Ocean City Boardwalk between 13th and 14th Streets. With his beard and odd assortment of merchandise, McDowell was a popular Boardwalk figure when I first arrived in town in the mid-Sixties.

Iron Mike, a deep sea diving suit was one of the attractions at the shop.

Sam is more generally recognized elsewhere as an artist and one of the best contemporary scrimshaw artists in the world.

After selling is Boardwalk shop in Ocean City Sam moved to California where he lives in Carmell, though he spent many winters at his island home at Bequia in the West Indies.

The island natives, as they have for centuries, are permitted to hunt whales, and invited Sam to participate in one of their hunts, which included a Nantucket Sleigh ride once the whale was harpooned.

Besides his scrimshaw, Sam also paints, and has done some paintings of Somers Point as he remembers it from his childhood, including the house on Somers Avenue where he was born and the trolley stop at Christmas time.
Posted by William Kelly at 8:47 AM