Scotty and Buck the Bartender 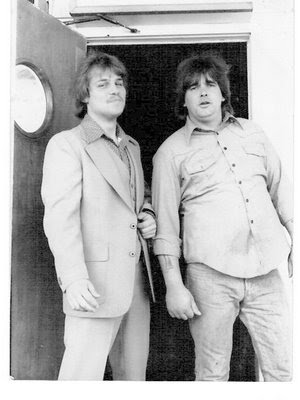 In any case, Scotty worked nights and Buck the bartender worked during the day most days, and sometimes there was Charlie Brown, and also a guy whose name I can't recall, but it might be Bill.

Bill recalled that early one summer a guy came in and got a beer and went into the back by the juke box and sat up on the pool table that ran against the back wall, that had a hard mahogany wood cover that could be lifted up and fastened to the wall to play. With the top down, people sat on it like a raised bench, and this guy sat on it with his back to the wall, writing furiously in a little notebook.

Bill said he talked to the guy and he was a college student from Philly, like one of the thousands of college students from Philly, but this guy was different. Bill said he talked to the guy for awhile, as he was waitin' on a friend. It wasn't until the guy became famous that he could even tell the story of Jim Croce sitting in the back of the Anchorage and writing one of his songs, suggesting that it was "Time In A Bottle."

Another day, Tito Mambo came down from Bay Shores and discovered the little piano that was left behind by the The Three Keys decades before. It still worked, except for a couple of keys, and he banged out a few tunes for all of the few customers in the place on a quiet, sunny afternoon at the Old Anchorage.

Then one afternoon Buck the bartender had to do something else and he asked Scotty to work his afternoon shift, and I joined him, and since there were no customers, me and Scotty played a game of pool. While we were shooting, two guys walk in the front door in suits and ties, lose around the neck, and carrying suitcases.

Barney and Marty, direct from Irleand, just off the plane, caught a bus from New York City to Atlantic City and took a cab to Somers Point where they were told by someone at the bus terminal that it was a place where they could get jobs for the summer.

Scotty gave them each a cold beer while he listed to their story and called over to me and asked if I thought we should call Brian, our Irish friend who came to America under similar circumstances a few years earlier and was now working as a bartender at Zaberers, a big dinner joint out on the Black Horse Pike by the Race Track.

While I gave Brian a call from the Anchorage pay phone, Scotty asked them what kind of work they wanted to do.

When we discussed the fact that the guy who ran the Anchorage kitchen was not coming back this year, Scotty asked the two Micks if they wanted to run the kitchen right there, and they looked it over.

There was a grill with an overhanging umbrella and a deep fryer, as well as a refrigerator and freezer, and plenty of pots and pans, it was just a matter of cleaning things up and getting some supplies, and oh, yea, what's the rent?

The rent, according to Joe Trichek, Andrew the owner's brother-in-law, was to pay the electric bill for the entire summer, which came to between five hundred and eight hundred dollars. No problem.

I had gone back to making pizza on the Ocean City boardwalk that summer, and couldn't leave that job, but I became Barney and Marty's partner by bankrolling the first couple food accounts - hotdogs, hamburgers, blocks of cheese, onions, tomatoes, french fries and fresh Formica rolls from Atlantic City. We got some fresh clams from a clammer. But that was basically the Anchorage menu that summer.

I explained to Barney and Marty what a Cheesesteaks was by making one, and it became the best item on the short menu.

They moved, at first, into the apartment at my house that wasn't rented out until Memorial Day, so they had a few weeks to find new quarters, and Brian got them a car from a waitress at Zaberers - a white 65' Mustang convertable, for a couple of hundred dollars.

I owned a '57 Chevy that summer so we had two classic cars between us.

During the day the Anchorage was pretty quiet, but at night, it filled up with young people and had three bartenders, all busy, all night long.

The enticement was the seven draft beers for a dollar that were lined up along the bar, and people would come in and drink for an hour or two and meet their friends before walking down the street to the rock & roll bars, Bay Shores and Tony Marts, where the bands played.
Posted by William Kelly at 9:43 AM

Labels: Flashback to the Summer of '76