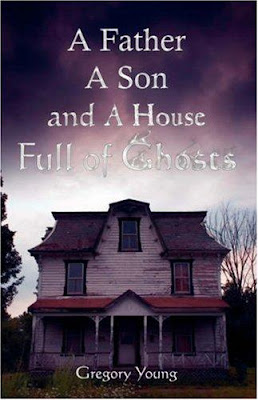 Gregory Young and other people who have lived in the old house thought they were going crazy, or at least some crazy things were happening to them.

The house on Somers Avenue in Somers Point doesn’t stand out among the other quaint bayside cottages, but what happens inside has spooked residents and visitors alike.

When the current residents began to experience some unlikely events, and began to think the house was haunted, they learned that a previous owner thought so to, and even wrote a book about it, that’s now a series of books.

Gregory Young’s “A Father, A Son and A House Full of Ghosts” was first published a few years ago, but since that was published, he’s also written, Book II, “the continuation of a true story of the paranormal events that a father and son experienced after purchasing a house which was occupied by ghosts.”

And now we have book III to complete the trilogy, and compliment his other books, “Kindred Emotions: Quotes of Wisdom,” “10 Holiday Plays for 4th,5th and th Graders” and “Over 100 Reasons Why Men Should Never Marry,” all privately published and available from Jetty Books (http://www.jettybooks.com/events.htm) or Infinity Publishers (http://www.buybooksontheweb.com/peek.aspx?id=3329).

The strange events began when he first bought the house in 2000 and began renovating it. As the bizarre occurrences began to add up, he investigated, and learned more of the history of the 100 year old house and who had previously lived there. Giving the accounts of others as well as his own experiences and those of his son, his books document the events while he speculates on the possibility of reincarnation and of angels watching over us.

As Gregory Young puts it, “The unexplainable occurrences in this house were happening more and more frequently. I couldn’t go on living like this. No matter where I was, I would be thinking about it. I couldn’t get it out of my mind. None of it made sense. I would tell these stories to people and they would look at me like I was crazy. I Must Be Crazy. They thought something was wrong with me. I began to think it myself. Was I losing my mind? Was this all in my head? Or, was I going through something extraordinary, something so rare and unbelievable that there just isn’t anyone to talk about it with. I was becoming more and more confused. I constantly though about it and I never knew what was going to happen next or when. I needed some answers.”

“The stories were adding up,” says Young. “There was certainly something in this house. There had to be. Both my ten year old son and I were becoming increasingly convinced. This is nothing that I would have ever wanted to expose him to, but he was here a lot of the times when these strange occurrences occurred. He witnessed them too. He could see the fear in my face and hear the panic in my voice. He and I would talk about it and try to come up with explanations, but just couldn’t.”

Lucky for them, the ghosts appear to be friendly, and only play with the electric, appliances and moving inanimate objects about. “With the many strange occurrences that have happened in this house, I don’t remember a time when either one of us were truly scared. It was more a case of being shocked, shocked at what we saw or what had happened. I didn’t have any answers, but I had a lot of questions, and the most formidable question was, is there something living in this house with us?”

Young says he eventually figured out, with the help of psychics, there are at least four ghosts, including Danielle, a fifteen year old African American slave from the 1700s and two mischievous children, Sarah, a four year old girl from the 1920s, and Jonathan, a ten year old boy who died of measles, and is dressed as a Boardwalk Empire extra.

Young has actually seen Agnes, and who hangs out primarily in the kitchen, and based on her behavior, wasn’t too keen on the recent renovations.

“Actually, I’m flattered,” noted Young. “I feel blessed to have such an extraordinary experience happen to me. It was nothing I was looking for, nothing I had planned. I guess I can say I enjoy it. It’s very friendly, nothing mean going on. It’s very good natured.”

“I was documenting all of the occurrences,” said Young. “I just kind of kept quiet and kept moving forward. Then I thought the best way to get this out would just be to write it all. I realized I had a great story here and I decided to publish it.”
With the complaints of strange events by the current occupants of the house and the publication of the latest edition of his book, Young has embarked on a local book tour of the area that includes the Cape May Farmer’s Market (July 12, 19, 26, Aug. 2, 9, 19), Cape May Tomato Festival (Sept. 3) and Jackson St. Fair (Oct. 1), Absecon Historical Society (Oct. 3), the Cape May Lima Bean Festival (Oct. 8) and Atlantic City Teacher’s Convention (Nov. 10-11).
Posted by William Kelly at 4:30 AM

I am not able to email you, but very interested in looking for my mother Marion Frances Devereaux. She gave me up in 1952. I was born in Somers Point. I am not having much luck in finding any history on her. Would you be able to help me? thanks, Margo of Cincinnati, oh

I know a marie and her son jim devereaux from somers point.

melissaleigh - this is margo again and i completely forgot about this post i made. can you email me???? that could be my biological mother. how old is she? although she may be related some other way being that her name is marie.

i hope you get this - thanks so much - margo of cincinnati, oh