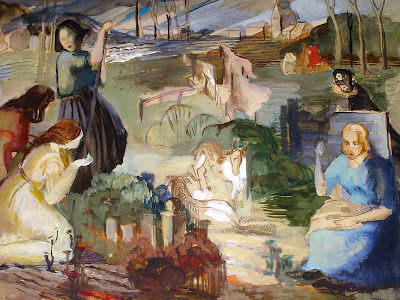 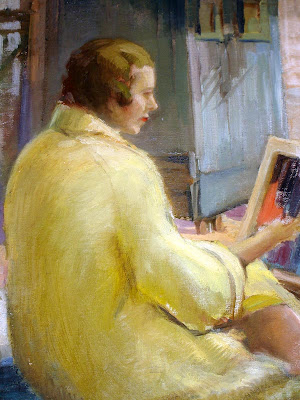 Women at Work, a self-portrait (left) and a photo of Madeline Vautrinot from a school yearbook.

Better known locally as the wife and widow of James "Sonny" Fraser, Madeline Vautrinot was an artist who won her first prize with a painting of the view from her Egg Harbor City bedroom window. Educated at Carnegie Tech in Pittsburgh her profile in Whos Who in American Art reads:

Sonny and Madoline lived in the historic house on the hill at English Creek where Sonny remodeled the old Grist Mill as a studio, opening windows and putting in a skylight in the ceiling. The studio was a popular place during Fraser's frequent parties that included Sonny's friends from the golf course and the race track, including Bob Hope, Bing Crosby, Dean Martin, Doris Day, Olympic champion Jack Kelly, and his daughter Grace Kelly.

A prolific golfer known for his long drives, Sonny contracted Hodgkins disease and died in 1950 at the age of 34.

Madoline continued to paint however, and according to her profile, was known for painting murals, though I don't know of any public murals in these parts.

Madoline's studio recently made the news as the Grist Mill, built in 1710, was the only thing left standing from that era when Egg Harbor Township celebrated its 300th anniversary in 2010. See blog entry: The Old Mill At English Creek.

More recently there was a story in the Press of Atlantic City about the mill getting a new water wheel.

Here are some more samples of her art, thanks to Maureen Keillor, her cousin who is compiling a biography of Madeline and her work.
Posted by William Kelly at 10:34 PM

Have been enjoying your blogs! I've heard or read somewhere that Madoline painted a WPA mural at the PO in EHC, and one at the Atlantic City Country Club, but haven't been able to verify.
mk