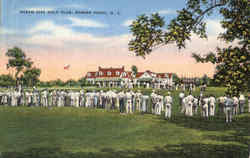 The Greate Bay Golf Club has been a social center of Somers Point and Ocean City NJ for over 80 years. First known as the Ocean City Golf Club, the original course was designed in 1922 by legendary Scotsman Willie Park, Jr., and opened in the spring of 1923.

“He was a multifaceted personality, a talented and prolific golf architect, one of the greatest golfers of his day, an entrepreneur and businessman, club maker, inventor and author,” said Price.

According to an October 19, 1922 Ocean City Sentential Ledger newspaper report, Park stayed at the historic Plymouth Inn in Ocean City while he designed the new course, shortly after he revamped the Atlantic City Country Club’s Northfield Links.

“The assurance that the Ocean City links will be perfectly constructed as humanly possible to have them is the fact that Willie Park has a world wide reputation to maintain. His latest effort must be superior to any previously attempted.”

While the golf club was originally built to lure tourists to Ocean City, it became popular with local businessmen and a major focal center of the area’s social life.

Unlike many golf courses of that era, it survived the depression with the assistance of Harvey Lake, who built the original clubhouse, a large, blue and white wood frame colonial that sat on a hill where the new clubhouse stands today. Harvey Lake, who was related to the Lake family, took on two partners, “Doc” Whittaker and Charles Zimmerman, who renamed it the Ocean City – Somers Point Golf Club.

Born in Petersburg in Upper Township on October 24, 1874, Harvey Young Lake attended school in Trenton before becoming business manager of the Ocean City Association, which controlled public utilities at the time. Lake dabbled in real estate, developed the Ocean City Bayou project (creating lagoons between 16th and 18th Sts), and served on the Ocean City Board of Education. He was an accomplished musician and an avid tennis player, but his main passion was golf.

Willie Park laid out the course on the high ground adjacent to the Somers Family cemetery, which overlooks Great Egg Bay over Kennedy Park at High banks, and on the hill Harvey Lake built his house that would become the clubhouse.

Lake also had some regulation tennis courts put in and to maintain the club he took on two partners, “Doc” Whittaker and Charlie Zimmerman. Doc Whittaker owned Holgates restaurant on the bay at 9th Street in Ocean City, while Zimmerman owned a hardware store in Philadelphia. Whittaker and Zimmerman reportedly paid $60,000 for their interest, took the course public and renamed it The Ocean City – Somers Point Golf Club.

There were two lakes on the course, one by the pump house and the other, which was called Lake Whittaker, but was later filled in. “You could get a quarter a ball for swimming in and retrieving one for somebody,” said Lashly, who remembers the old caddy shack on the first tee by the 18th hold near the clubhouse. Walt Johnson, the groundskeeper before Butch Shurman, used a horse drawn tractor to mow the lawn.

Charles Nespy, who was a club member for 45 years, recalled the old, quaint clubhouse that was run by Ida and Maria. “They were there when I came and there when I left,” said McNespy. “They lived at the club and if they were up, the club was open. Maria tended bar and Ida cooked the best creamed chip beef, tomato and milk gravy. Everything was home cooked. “ Local bartender Vince Rennich, often recalled visiting the clubhouse after hours, playing cards, darts and pool.

Eddie O’Donnell, for whom an annual golf tournament is named, lived nearby, next to Joe DiOrio, another prolific amateur golfer. O’Donnell served as the pro from 1948 to 1960, and named his street Par Drive when the city finally got around to paving the street that runs along the course. Deer and other wild animals were frequently seen around the course until the 1950s, when they developed the Fairways homes and the Garden State Parkway came in.

“When they put the developments in they ruined one of the best hunting grounds around,” Buck related. “I remember when there wasn’t a home from Route 9 to Mays Landing Road. Buffalo Plastics came first, then a little motel, the oil company and then the Parkway came in. What’s now stores and developments behind the golf course was once all open country, and the best hunting in the world.” Joe DiOrio recalled that, “Deer used to come up to our back door when we built the bar on MacArthur Blvd in 1951.”

Eddie O’Donnell said, “When I first got there they had the last of the great amateur Eastern tournaments,” events that included such legendary amateur champions as J. “Woody” Platt, James “Sonny” Fraser, Billy Hyndman III and a young Arnold Palmer, before he became a professional.

But the most fun was had by a group of golfers that was known as the “Spinach Mob,” a group of locals who played together many afternoons. Some were nightclub owners, like Rickie Rich, who owned the Hialeah Club in Atlantic City, and Elmer Blake, who ran Steel’s Ship Bar on Bay Avenue, next to Tony Marts.

They worked nights and like to play golf all day with their friends – John Cressi, the Linwood Country Club pro, Harry Azzi, Ernie Brown, John Keminosch, Bert English, Alan Meyers, Freddie Curtis and Lou Curcio. They were called “The Spinach Mob” because they enjoyed playing for sporting wagers and gave each other nicknames. O’Donnell was “Lucky Eddie,” Azzie was “Az,” Curcio was “Cooch” and Curtis was “Checkbook” Freddie because he never won and always paid off with a check.

Curcio, the club champion from 1954 to 1958, ran the Tilton Driving Range for many years and was the handicap man for the Spinach Mob. “There were eight of us who played together,” Curcio recalls,” and we had a handicap system. Harry Elwell was the best player , a scratch player, and I could never beat him. I only won after Harry Elwell was gone.” Curcio then won five consecutive years, lost one and then never came back again.

O’Donnel said it was a slow day when the young Coast Guard enlisted man came into his pro shop sometime in 1950 and wanted to play. Eddie asked him if he was an officer, and he said, no just an enlisted man. But he mentioned that his father worked at golf course near Pittsburgh, and Eddie said it was okay, and he could play for free.

O’Donnell introduced the young Palmer to the club champion and local postman Harry Elwell, Sr., who became somewhat of a mentor to Palmer. When there paths crossed again in Florida some twenty years later, Palmer asked O’Donnell about Harry Elwell, who had passed away earlier, but who he remembered as an influential person in his life.

According to O’Donnell, there weren’t many people playing golf back then, and the club only had 50 or 60 members.

One man who stayed around into the early 1950s was Harvey Lake. He would occasionally put in an appearance on the course in his later years. O’Donnell remembered Lake playing with a single club, called a cleek. Before numbered irons were invented, you had different types of clubs for different situations, including cleeks and mashies.

McNespy also remembered Lake well. “I can see him now,…suspenders, glasses, a cap and a garter on his sleeve, just like the old time bartenders used to wear, standing about five foot six, and he’d play five or six holes with one club, a 4 wood.”

Eventually Whittaker, Zimmeman and Lake died. They had a deal with each other where when one died the others would inherit the shares until no one was left, and the last one would leave the course to charity. Trustees for Shore Memorial Hospital and Burdette Tomlin Hospital sold the course to a group of businessmen in 1971. Mr. Eugene Gatti and attorney Art Kania were the primary partners, while the limited partners included Mr. Joseph DiOrio, Dr. Nick Collova, Cas Holloway and Tullio deSantis.

They were also the principle partners with the Brighton Hotel and Casino in Atlantic City. In 1981 the Sands Corporation bought the hotel, casino and country club, renaming the country club the Sands. It remained a part of the casino corporation’s assets until Mr. Gene Gatti repurchased the course in 1991 and renamed it Greate Bay Country Club.


They made significant renovations, leveled the old clubhouse and built a new one, upgraded the course, changed a few holes around (The fairways, bunkers, greens and sandtraps remained basically the same, only then numbers changed. The old 18th became the 17th, the old 10 became 1), put in a driving range, built condos around the course and changed the name to Greate Bay Country Club.

It was under the stewardship of prolific amateur golfer Mr. Gene Gatti when the club served as host to the ShopRite LPGA Classic tournament from 1988 to 1997.

In 1998 Gatti sold the club to Archie Struthers, who began working in golf as a caddy at Pine Valley. Struthers renovated the course in an effort to recreate some of Willie Park Jr.’s original design ideas, yet maintain the course’s championship qualities. Struthers also took the course private again, and went on to design and build his dream course – Twisted Dune, which is recognized for its unique, one of a kind attributes.

Although Pat Croce is well known for being passionate about sports and competition, it was his partner Mark Benevento who convinced him that golf is good and Greate Bay a good investment and they have been managing the club with an energy and synergy that’s contagious.

To comment on this story: - Billkelly3@gmail.com
Posted by William Kelly at 5:43 PM