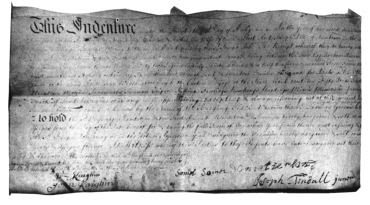 1700s (circa) Deed for property in Egg Harbor Township written on sheepskin.

Crossroads of the Jersey Shore – Lacked Recognition, Until Recently.

The area has changed tremendously over the three hundred years that Egg Harbor Township has been in existence, especially in the past fifty years when it went from a rural to a suburban to an almost urban community.

Before the European settlers came, everything had stayed pretty much the same for the previous ten thousand years, as the Lenni Lenape Indians lived in close harmony with nature, but the changes came swiftly when the settlers moved in and made the area around Great Egg Harbor their home.

While the Indians are gone, they left behind some of their language, especially place names that we’ve adopted, like Patcong Creek that sets the legal boundaries of Somers Point, and Absecon Island.

The name Egg Harbor stems from the name given to the bay and river by early Dutch explorers, who were impressed by the huge numbers of bird’s eggs that lined the marshes. The name was placed on early maps and was incorporated by the early settlers, mainly Quakers related to the Somers, Steelman, Scull and other families that have towns named after them and still have relations living in the area.

“It’s not unique that people settled here,” says June Sheridan, “but we have a unique history that predates the founding of the country that few people are aware of, like the shipbuilding industry, and all the schooners that were made here.”

If broken into historic time periods, the Indians lived in the Woodland era before the colonial period, which included many local Egg Harbor Township patriots who fought in the revolution. Then there was the industrial shipbuilding period during the age of sail, when over a hundred schooners were built along Patcong Creek and Egg Harbor River. When the last schooner was built in the late 1800s, the area slipped into a quite, rural community until the dawn of the automobile, when it became host to traveling tourists on the pike and along the bay and river.

Then, with the casinos and the spread of the suburbs, and designated a growth area by the Pinelands Commission, Egg Harbor Township quickly became a major urban area, but still got little recognition, until recently.

Now that’s all changing and Egg Harbor Township is getting the recognition along with the development that was targeted by the Pinelands Commission. According to Heinz, “The nature of the township changed from a rural, clamming, fishing, farming community to a modern one very quickly and for a number of reasons, not only because of casinos.”

“Even in the pre-casino era,” says Heinz, “four out of five Atlantic City access roads went through EHT, and along with the airport and NAFAC, EHT was always the crossroads of South Jersey.”

The Atlantic City Race Track, which opened in EHT as the first legal gambling in New Jersey in 1945, wasn’t really that big of a deal, as most of the patrons went to Atlantic City afterwards. The only time the track impacted the township was in 1969 when they held the Atlantic City Pop Fest at the track, and the hippies came and camped out all that weekend.

But the changes came slow at first. When Heinz came to office in 1977, the police department was run out of a basement off the Black Horse Pike where prisoners had to be handcuffed to a pipe and since it didn’t have a toilet they had to use the bathroom at the nearby diner. It was during Heinz’s administration that the police got their new home and a K-9 unit that was used to handle some of the mainly tourist crowds at the after-hours bars that were on the outer fringes of the township when they were legally permitted to remain open 24 hours.

The first municipal meetings in 1710 were held at the local public tavern in Bargaintown, which was officially licensed to dispense liquor and provided the first taxes for the government.

The bars, nightclubs and restaurants in Somers Point had to close by 2am, while just across the Patcong Creek the bars in the Township stayed open all night. Of the old after hour bars in EHT, there were the Dunes and Mothers out on Longport Boulevard, and Jack’s Grove, which became the Attic/Boatyard, that’s now the Elks Club. “Those places were problems when they got jumping after midnight,” said Heinz, “and not only with the college kids, but with bikers. When some of the police got beat up by the bikers, we started the K9 unit.”

Then they rolled the bar hours back to the more reasonable three and four in the morning, “so that made the college kids go home and not stay the entire night.”

At the time the government was run out of the Old Grange Hall that was falling down and eventually had to be raised a year before the new municipal hall was built. Heinz recalls getting a phone call from the guy contracted to demolish the building, and since he was performing a marriage ceremony, he asked him to call back. Resuming the ceremony, the room shook as the contractor began the demolition with the mayor and bride and groom inside.

They found some old books in the old Grange Hall that were hidden by a false ceiling among them ledgers from previous administrations and a “Book of Bastardy,” which listed all the children born out of wedlock in the township, and is now on display at the new EHT Historical museum, which is located at 6647 West Jersey Avenue.

The rapid change in the nature of the community and the development of residential neighborhoods not only saw the end of the Old Grange Hall but also the old mill that was still standing on Mill Road until the 1980s when nobody wanted to assume responsibility for the damn.

Today there isn’t much left standing from 1710. Architectural historian Joan Berkey, who also has a new book on historic Cape May County homes, put together a booklet of the historic buildings in the township, the oldest she dates to the 1790s.

The only historic structure left from 1710 is the damn and foundation of the grist mill at what is now a private home in English Creek that used to belong to James “Sonny” Fraser, the former amateur golf champion and state legislator who founded the Race Track.

While the township takes pride in its revolutionary war heroes and shipbuilding past, there was also the Sunshine Park nudist colony, the KKK meetings in Bartaintown and Price’s Pit, one of the nation’s most serious toxic waste dumps. Discovery of Prices’s Pit forced then Mayor Heinz to get new water for the residents who lived near that area, and it still remains a serious issue with Heinz today. “They discovered that problem in 1977 and nothing was ever done, and it sits there the same way today.”

While the dramatic changes are self evident to those who witnessed it, as June Sheridan says, “If someone left and came back here after thirty years they probably wouldn’t recognize very much.”

But the history is still there if you look for it and the 300th anniversary of the township is being taken advantage of to call attention to and educate people about the history of the area. Marilyn Gallagher, who was the chair of the 300th Anniversary Committee, gave the year-long program a lot of enthusiasm. “Our 300th anniversary was a wonderful opportunity to reach all our residents - old and new - and let them know about our rich past and all the positive future possibilities,” says Gallagher. “They can be proud to be a part of EHT - and our growing community.”

Besides opening the new Historic Museum on West Jersey Avenue on the actual date of the anniversary, over a thousand people were on hand to open a 'Celebration Shoppe' at Shore Mall where information as well as commemorative items like Berkey’s booklet of historic EHT homes were purchased throughout the rest of the year.

According to Gallagher, “the 'high growth' designation we received from the Pinelands Commission is a point of reference for the exploding population in EHT. Another, possible point of reference could be our withdrawal from the Greater Egg Harbor Regional School District, and we now have a student population of over 8,000, above many North Jersey school districts, and with the 2010 census, EHT is expecting to topple well over the 40,000 mark in total population.”

The only thing certain after 300 years is that Egg Harbor Township is a different place than it was three centuries ago, and in 300 years, very little will be left of what we have today, especially since we live in such a disposable society.

Looking for info on Christopher Van Sant who had a shipyard on Patcong Creek. Any info would be appreciated.

Hello fellow hunters. My family (The KNOWLES) lived in the Great Egg Harbor area from 1785 to 1810. They came from Haddam, Conn and left for Ohio. While in the Harbor they worked on ships and learned the craft of carpentry. While here, they married into the Estell family, the Brooks family and the Vangilder family. I found a few scraps of info on them while here including being on the books of Constant Sommers day records in the 1790's. They attended the Head of the River Church and one daughter (Martha Knowles Estell) is buried in an unmarked grave of the cemetery. If anyone has more records on this family, I would love to know about it. Sounds like this area in the 1790's was beautiful and I'm sure it was very active. Happy Hunting everyone!